Disciple of the Lich: Or How I Was Cursed by the Gods and Dropped Into the Abyss! (Light Novel) Vol. 1 (Paperback) 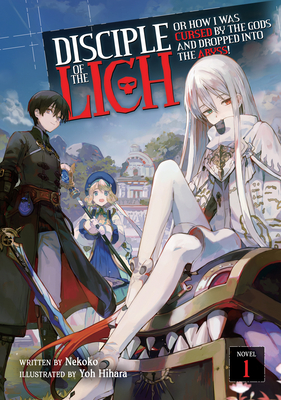 Disciple of the Lich: Or How I Was Cursed by the Gods and Dropped Into the Abyss! (Light Novel) Vol. 1 (Paperback)


Available in Warehouse. Wait for Email Confirmation for ETA
An isekai adventure about an ordinary boy taken under the wing of a mysterious undead girl!

When Kanbara Kanata is whisked away from his mundane life to a world of adventure, he inadvertently offends the all-powerful being who brought him there. As punishment, he is sent to the bottom of the most dangerous dungeon without a single special power or ability! He is sure that he’s a goner until he meets a lich girl named Lunaère—an undead powerhouse who hates humans, but grudgingly decides to assist him all the same. With Lunaère’s help, Kanata may just grow into someone truly incredible!
Nekoko is a Japanese writer best known for light novel series Disciple of the Lich and Reincarnated as a Dragon Hatchling, as well as manga series Boushoku-Hi no Ken.


Hihara Yoh is a Japanese artist best known for the light novel illustrations in Disciple of the Lich, as well as for work in video games such as Secret Spirit Agents and Ayakashi: Ghost Guild as part of the artist duo HEMISPHERE.