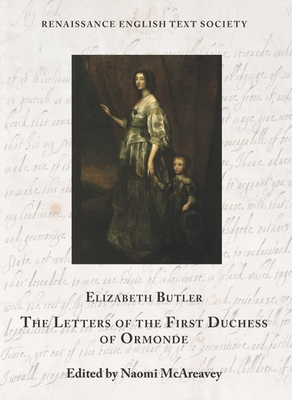 This volume is the first to bring together the entire extant correspondence of one of the most significant women in early modern Ireland, Elizabeth Butler, first Duchess of Ormonde. She was the wife of James Butler, twelfth Earl and first Duke of Ormonde, who, as Ireland’s only duke and three times its lord lieutenant, was a figure of considerable importance in seventeenth-century Ireland. But far from being overshadowed by her powerful husband, Butler was a person of significant power and influence in her own right. Descended from the tenth Earl of Ormonde, she brought a hefty portion of the Ormonde estate to the marriage. As Countess, Marchioness, then Duchess of Ormonde, as well as three times vicereine and a high-status courtier, she sat at the pinnacle of Irish and English society, unmatched by any other Irish woman of the period in terms of her wealth, social standing, and power. Her surviving correspondence reveals her importance within the Ormonde-Butler family and in the social, cultural, and political life of seventeenth-century Ireland.

The volume comprises more than three hundred letters written by Ormonde to her husband and family, agents and servants, and friends and clients. Spanning six decades, these letters are meticulously transcribed, edited, and annotated, and the volume includes a substantial scholarly introduction, family trees, a glossary, and other resources.

Naomi McAreavey is a lecturer of Renaissance literature at University College Dublin. She is coeditor, with Julie Eckerle, of Women’s Life Writing and Early Modern Ireland, and, with Fionnuala Dillane and Emilie Pine, of The Body in Pain in Irish Literature and Culture.

“This is a landmark publication, enabling readers to delve deep into a rare treasure trove of letters by a leading aristocratic woman of seventeenth-century Ireland and England, spanning fifty-five years from adolescence to old age. . . .  This edition will be a much-thumbed resource for those seeking information about the wider family and three kingdoms history, as well as those with a particular interest in early modern women’s letters. It is a welcome and important contribution to scholarship on letter writing, women’s writing, and seventeenth-century Irish history, and is sure to advance the field.”
— Marie-Louise Coolahan, Professor, NUI Galway