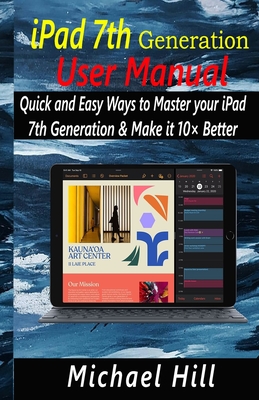 
Available in Warehouse. Wait for Email Confirmation for ETA
This book cannot be returned, cancelled, or exchanged. Please call for availability and pricing
Apple's new iPad is aimed at anyone who wants to work (and play) while on the go. The device is light, it has a large capacity battery that can keep things going all day, it has desktop-class web browsing, and it has an ever-expanding catalog of applications in the App Store that allows for universal usage of the new iPad, including productivity, creative, education, legal, medical, and more. Additionally, the iPad 7th generation has built-in accessibility features and a deep integration with iPadOS.You've just picked up your new Apple iPad and you're excited about the potentials of the device, But while you can pick up on some neat features by experimenting on your own, it could take you quite a long time to uncover all the different tips & tricks your iPad is capable of performing.That's where we come in. Instead of spending time sifting through different menus looking for a way to take a screenshot, connect your Bluetooth headphones or whatever else, we've detailed tips and tricks to help you out. Here is a preview of what you will learn: -Setup your 7th Generation iPad-How to access the App Switcher-access the Control Centre-How to search on iPad-How to close windows and apps on iPad-View previews and quick actions menus on iPad-Explore the iPad Home screen and open apps-Change common iPad settings-How to change orientation on iPad-How to quickly switch between apps-How to adjust the split point between two apps when multitasking on iPad-How to get rid of split screen on iPad-How to drag and drop files/photos into emails or messages-How to copy text/URLs to Notes-Keep your favorite apps readily available on iPad-Add text, shapes, and signatures with Markup on iPad-Use Your iPad As Second Display For Mac-Take Full Page Screenshots in Safari-How to use Memoji and Animoji in iMessage-Set up Apple Pay-And so much more Download your copy of "iPad 7th Generation User Manual" by scrolling up and clicking "Buy Now 1-Click" button.