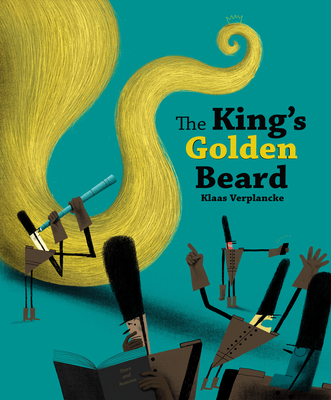 
Available in Warehouse. Wait for Email Confirmation for ETA
Who's to blame when a vain, heedless king meets his comeuppance? He is, of course! Fans of Tomi Ungerer's mischievous humor and Jon Agee's sly morality tales will be delighted by this hilarious read-aloud about a long, long beard and its short-sighted royal owner, by a popular Belgian illustrator, designer, and animation whiz.

The lush, golden royal beard is a wondrous thing - especially to the king himself. He spends his days admiring and grooming it, and passes laws making it a crime punishable by death for anyone else's face to sport even a single hair. As the people of the kingdom nervously shave daily, the royal beard grows and grows until it appears at the palace's back gate. What happens next will have readers laughing along -- and cheering for the astronomers who, unlike the tyrannical king, know that the earth is round.
Klaas Verplancke is an author, illustrator, animator and professor of illustration whose clients include The New Yorker, The New York Times, and MOMA. A finalist for the Hans Christian Andersen Medal for illustration and a frequent nominee for the Astrid Lindgren Memorial Award, Verplancke has written and illustrated books that have won the prestigious Bologna Ragazzi Award and been selected for the White Raven and IBBY Honor lists. In the spring of 2020, his animated poster "Save Lives. Live Safe. #keepdistance" appeared on Times Square screens, the double-sided Lincoln Tunnel billboard, and 1,800 linkNYC screens throughout New York City and was promoted via interviews on PBS Newshour and more.
"What once might have been 'long ago' seems eerily not so long ago at all." — The New York Times

"A new children's classic...will warrant entry into your forever library....playful, weird, funny, absurd, and wil make elementary-aged children laugh out loud....one of those picture books that kids will laugh at and adults won't mind reading over and over." —Daddy Mojo

“A fairy tale for our unusual times. Verplancke hopes the book will help children (and their respective parents) understand the danger of absolute power, narcissism, selfishness and ignorance of science and knowledge." — Steven Heller, The Daily Heller/PRINT

“A fun way to introduce readers to concepts such as self-indulgence and abuse of power….An enjoyable read, a worthy addition to any library, and a useful tool for teaching humility and respect.” —School Library Journal

"The illustrations are extremely clever and the text flows around the sides and bottom of the pages, even appearing upside down in some places, to convey the concept of circumnavigation…..Just plain fun. Recommended." — School Library Connections

"Rapunzel has nothing on the vainglorious king from this sly cautionary [picture book] .... “The law may be the law, but some laws are bad for your health,” a new king remarks with distinct schadenfreude. Readers fond of Jon Klassen’s karmic tales will agree.” —Booklist