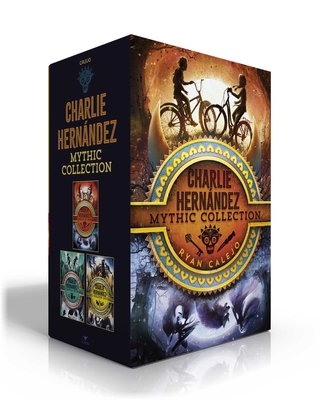 The first three books in the Latinx mythology-inspired Charlie Hernández middle grade series are now together in a collectible hardcover boxed set—perfect for fans of Rick Riordan and The Storm Runner!

Thanks to his abuela’s stories, Charlie Hernández possesses an almost encyclopedic knowledge of the mythological monsters that haunt Latinx folklore. And even though his grandmother sometimes hinted that the tales might be more than mere myth, Charlie always assumed she was only messing with him. That is, until he begins to experience some freaky bodily manifestations—ones all too similar to those described by his abuela in his favorite legend.

The next thing he knows, Charlie finds himself swept up in the middle of a millennia-old war between La Liga, a secret society of legendary mythological beings sworn to protect the Land of the Living, and La Mano Peluda (a.k.a. the Hairy Hand), a cabal of evil sombras determined to rule mankind. With the help of his lifelong crush, Violet Rey, and his grandmother’s stories to guide him, Charlie must embrace his ancient destiny in a journey that will take him across the Spanish- and Portuguese-speaking world in face-offs against ancient undead evils. At least, if he wants to live long enough to graduate from middle school...