It Sounds Like Halloween! (4-Button Sound Books) (Board book) 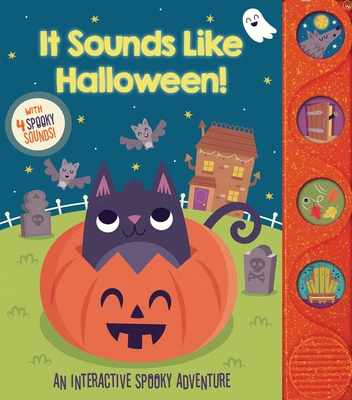 It Sounds Like Halloween! (4-Button Sound Books) (Board book)


Available in Warehouse. Wait for Email Confirmation for ETA
Young readers will love discovering the not-so-spooky sounds of Halloween in this interactive storybook with 4 unique sound buttons!

It’s Halloween night, a time for tricks and for treats. There are spooky sounds all around, but they’re not all what they seem! Is that a werewolf’s howl or just a cute little dog in a Halloween costume, barking at the moon? With picture prompts to push the sound buttons throughout the story, young readers will have an eerily good time discovering what is making each sound in this fun, interactive board book.
Maggie Fischer is originally from Oregon, but now lives in Seattle, Washington, after receiving her B.A. in English from Gonzaga University. The daughter of a children’s librarian, Maggie has grown up surrounded by books and feels impossibly lucky to write and edit books for kids. She spends her time trying not to get worried about the increasing number of crows in her backyard, petting her enormous cat, Finch, and drinking more coffee than is probably healthy.

Gareth Williams was born in Hillingdon, West London, but ventured (when he was two) to the green valleys of South Wales. At an early age, he loved to draw. He quickly realized that his dream of becoming the ­first Welsh astronaut would be sidelined by his creative abilities and talents (but he still secretly wishes he could have rocketed into space). Gareth studied Illustration at Swansea Metropolitan and went on to work with leading stationery and greeting cards companies. Now he is looking to develop his freelance career. His work has a strong illustrative influence, with lots of textures and layers to create a hand drawn style. He also loves letterpress and screen printing. He frequently visits art exhibitions and ­finds himself wandering around the galleries with his sketchbook, and then getting back to his computer, putting his play-list on shuffle, opening up his sketchbook and exploring new techniques and ideas.