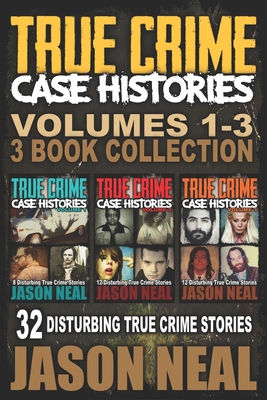 
Backordered - ETA Unknown
This book cannot be returned, cancelled, or exchanged. Please call for availability and pricing
32 True Crime Stories of Murder & MayhemReaders love this series - More than 1,400 five-star reviews on Amazon and Goodreads.Three Book Collection Only $22.76 (33% Off - Originally $33.97)Three Book Collection. First Three Books of the True Crime Case Histories Series (2019)A quick word of warning. The true crime short stories within this three book collection are unimaginably gruesome. I start all of my True Crime books with a quick word of warning. Most news articles and television true crime shows skim over the vile details of truly horrible crimes. In my books I don't gloss over the facts, regardless of how disgusting they may be. I try to give my readers a clear and accurate description on just how demented the killers really were. I do my best not to leave anything out. The stories included in these books are not for the squeamish.What you are about to read are my first three books. The stories in this collection will make you realize just how fragile the human mind can be.A sampling of the stories include: The Canal Killer - A violent psychopath cuts off the head, hands, and feet of his girlfriends and dumps them in the canals of London and Rotterdam.The Head in the Bucket - A drug kingpin chops off the head of one of his dealers and carries it around in a Home Depot bucket.Captain Cash - Another drug dealer butchers an entire family so he can take over a man's fruit shipping business and transform it into a drug shipping business.The Coffee Killer - A young woman, jealous of her rich socialite friend, poisons her by lacing her coffee with cyanide in a public coffee shop.The Arizona Torso Killer - A petite trophy-wife shoots her husband, freezes his body, hacks him up with a jigsaw and dumps his torso in a dumpster behind a grocery store.The Oxford Murder - A young college student strangles his girlfriend and crams her body into an eight-inch crawlspace beneath the stairs.The Girl in the Barrel - A homeowner finds a fifty-five gallon barrel in the crawl space beneath his home. What they find inside the barrel unlocks a murder mystery dating back thirty years.The Dexter Wannabe - A young man obsessed with the TV show Dexter lures unsuspecting victims to his "kill room" and keeps a detailed diary of the dismemberment of his prey.The Murder of Elizabeth Olten - A fifteen-year-old girl wants to know what it feels like to kill a person. Interpol's Most Wanted - When fishermen pull up the dead body of a man in the English Channel, police stumble upon one of Interpol's Most Wanted criminals.The Girl in the Box - An unbelievable story of a psychopath who kidnaps a young girl and keeps her as a slave locked beneath his bed for seven years.The Green Chain Rapist - A beautiful young mother is butchered in broad daylight in a London park and the only witness is her two-year-old son. Police then waste three years chasing the wrong man while the real killer slaughters another woman.Paige's Secret Life - A young single-mother of three goes missing and police realize she's been living a secret life that her friends and family didn't know about.A Walking Shadow - A suicidal teenager, frustrated with the bank threatening to foreclose on the family home, kidnaps the bank manager's ten-year-old son and holds him for ransom.Plus 18 more truly disturbing true crime stories.Scroll up to get your copy