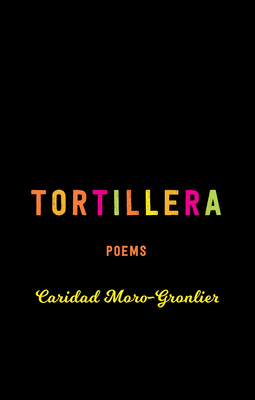 
This title is likely unavailable. Email or call for price and availability.
The word tortillera means lesbian in Español. The moniker is familiar to most Spanish speaking cultures, but especially particular to the Cuban experience. In most Cuban-American households to be called a tortillera (whether one is one or not) is the gravest of insults, the basest of adjectives, a cat call that whips through the air like a lash whose only intention is to wound, to scar. Many a first-generation, Cubanita (the ones who are into other girls, anyway) has suffered, denied, wailed over the loaded term, but in Caridad Moro-Gronlier’s debut collection, Tortillera, she not only applies the term to herself, she owns it, drapes it over her shoulders and heralds her truth through candid, unflinching poems that address the queer experience of coming out while Cuban.

The first half of the book immediately plunges the reader into the speaker’s Cuban-American life on-the-hyphen through vivid, first person narratives that draw one in, making the reader privy to the moments that mold the speaker’s experience: marginalization at a teacher-parent conference; the socioeconomic distinctions at assorted Quinceañera celebrations; a walk down the aisle toward divorce amid a back drop of wedding registries and Phen-Phen fueled weight-loss; post-partum depression; a peek into a No-Tell motel that does tell of the affair she embarks upon with her first female lover; the agony of divorce vs. the headiness of sex and lust; the evolution of an identity in verse.

Part reckoning, part renewal, part redemption, part rebirth, the poems in Tortillera come clean, but more than that, they guide, reveal and examine larger considerations: the role of language on gender its subsequent roles, the heartrending consequences of compulsory heterosexuality, as well as the patriarchal stamp emblazoned on the Cuban diaspora. The work contained in Tortillera befits its audacious title—bold, original and utterly without shame.

Winner of The TRP Southern Poetry Breakthrough Series: Florida
CARIDAD MORO-GRONLIER is the author of the chapbook Visionware. She is also a Contributing Editor for Grabbed: Poets and Writers Respond to Sexual Assault, Empowerment and Healing and an Associate Editor for SWWIM Every Day. Recent work can be found at The Best American Poetry Blog, Rhino, Go Magazine, Fantastical Florida, Notre Dame Review, West Trestle Review, and others.
“In this arresting collection, Caridad Moro-Gronlier renders a vivid and astounding portrait of her womanhood with all its complex intersections and contradictions: her loving resistance against cultural expectations as a daughter of Cuban exiles; her fraught triumph over misogyny; her traumatic healing from sexual assault, her joyful fears of motherhood; and her terrifying courage of coming out and embracing her sexuality. Moro-Gronlier’s unflinching yet vulnerable voice joins the chorus of luminaries the likes of June Jordan, Adrienne Rich, and Gloria Anzaldúa, together singing rebellion in harmony with love.”
—Richard Blanco, Presidential Inaugural Poet, author of How to Love a Country

“An unflinching, delicious, and fierce anthem to Cuban-American and queer identities, Tortillera reclaims the homophobic slur of its title, engaging and subverting the canonical tradition of the love poem. Language, in its topographies and powers and failures, lies at the heart of these poems’ investigations: Moro writes, “of loss / the third language / we speak at home.” Tortillera confronts ‘poverty’s rumble,’ familial connections, sometimes fraught, sometimes endearingly tender. ‘Sifting through the rubble’ of fragmented romantic and parental relationships, the book is brilliant in its critique of beauty standards and machismo. I love Caridad Moro’s work, which reverberates with flavors of Miami—guarapo, harina con huevo frito, yuca, lechón—these are poems I admire and applaud, poems I read and reread with a ferocious appetite."
—Jenny Molberg, author of Refusal

“The poems in Caridad Moro-Gronlier's moving and multi-valent debut Tortillera travel great distances, within the self and beyond. By turns lyric and narrative, tender chronicle meets tough reckoning, the speaker of this unflinching memoir-in-verse plumbs ‘the canyon of want’ as daughter, wife, mother, and ultimately, as the authentic queer woman she was meant to become—'buried for eons, glorious, finally found.’”
—Julie Marie Wade, author of When I Was Straight and Just an Ordinary Woman Breathing

“‘I wasn’t la niña bonita / my parents wanted,’ says the speaker early on. ‘I was the mouthy one’—and what a ride-of-a-book this is, our narrator ‘croon[ing] words on command’ to flesh out a sometimes heart-wrenching journey . . . from ‘[lying] within a canyon of want’ to being ‘talked into a pool hall / strung out on tequila and cafecito.’ Let’s call it deliciously transgressive—where someone ‘poured red velvet into my glass’ for the sake of this ‘infection we call love’ that may lead one to utter: ‘the ache that is your name’ and experience the ‘warble // of loss.’ In short, Tortillera ‘is a thing of beauty / but not in the way / of Barbie dolls’!”
—Francisco Aragón, author of After Rubén

“Gorgeous, powerful, arresting, and fierce, this collection explores Cuban-American and queer identity in a country and world that sometimes fails to accept either. Moro-Gronlier beautifully explores the intersectionality of race, gender, and sexual orientation, while gifting us deliciously lush and potent poems that take on the wrongs of racism, problematic parental relationships, misogyny, and sexual assault. With each stanza, the poet steps more and more fully into her most authentic self.”
—The Eric Hoffer Award