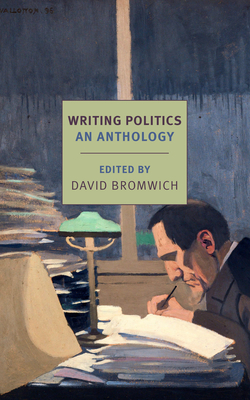 
This title is likely unavailable. Email or call for price and availability.
Explore the tradition of the political essay with this brilliant anthology.

David Bromwich is one of the most well-informed, cogent, and morally uncompromising political writers on the left today. He is also one of our finest intellectual historians and literary critics. In Writing Politics, Bromwich presents twenty-seven essays by different writers from the beginning of the modern political world in the seventeenth century until recent times, essays that grapple with issues that continue to shape history—revolution and war, racism, women’s rights, the status of the worker, the nature of citizenship, imperialism, violence and nonviolence, among them—and essays that have also been chosen as superlative examples of the power of written English to reshape our thoughts and the world. Jonathan Swift, Edmund Burke, Henry David Thoreau, Harriet Taylor, Abraham Lincoln, George Eliot, W. E. B. Du Bois, Mohandas Gandhi, Virginia Woolf, Martin Luther King, and Hannah Arendt are here, among others, along with a wide-ranging introduction.
David Bromwich is Sterling Professor of English at Yale University. His books include Hazlitt: The Mind of a Critic, Disowned by Memory: Wordsworth’s Poetry of the 1790s, The Intellectual Career of Edmund Burke, and, most recently, American Breakdown: The Trump Years and How They Befell Us. His collection of essays on modern poetry, Skeptical Music, won the PEN/Diamonstein-Spielvogel Award for the Art of the Essay in 2002. His articles on contemporary politics, the war on terror, and the fate of civil liberties in the United States have appeared in Dissent, The Nation, HuffPost, The New York Review of Books, antiwar.com, TomDispatch, Mondoweiss, Guernica, and the London Review of Books.
“Penetrating essays across three centuries consider freedom, power, and justice. . . . Overall, the sophistication of language and argument throughout this anthology testifies to what public discourse used to sound like before it became dominated by Twitter rants. Well-chosen, enduringly relevant selections.” —Kirkus Reviews

“David Bromwich has chosen essays in which famed dissenters, critics, and reformers courageously address their fellow citizens, reframing a shared world and its political demands. They offer an unparalleled education in how to think and act politically.” —Karuna Mantena

“David Bromwich—one of the few great public intellectuals in our time—has given us a feast of wise and courageous essays by exemplary writers of the highest order! His elegant and eloquent introduction sets the stage for a caravan of profound reflections so timely for our historical moment of escalating moral decay, political corruption and massive arbitrary power.” —Cornel West