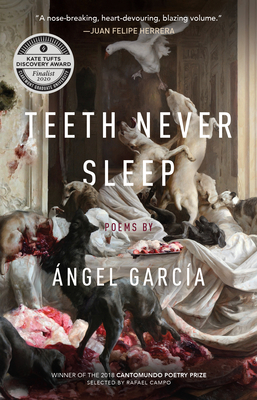 Drawing on folklore and fantasy, childhood memory and hallucination, and marked by a tone of piercing divulgence, Teeth Never Sleep nimbly negotiates the split consciousness a culture of dominance requires of men (especially men of color), highlighting the fissures in selfhood created by the pressure to seek submission over intimacy while still wanting desperately to be loved, and tracing the contorted route by which emotional pain finds expression in violence. “The night my girlfriend tells my mother I beat her, / I feel betrayed. This was a secret we kept between us. / That night, I was no longer my mother’s loving son,” the speaker in one poem confesses, and later “I never wanted to be this kind of animal.”

And yet, through the lens of Ángel García’s sharp imagining, men frequently appear as beasts (sometimes literally)—as hybrid beings both tender and brutal—that he steadfastly refuses to let off the hook as he obsessively catalogs the origins of toxic masculinity (the first time I made my mother cry, the first time I pitied my father, the first time I saw a girl bleed) and its quiet, lasting effects: “Still a part of me believes a / man shouldn’t cry in front of a woman, even in the dark.”

In a culture of weaponized masculinity, the poems in Teeth Never Sleep make a doorway of a wound, inviting readers to walk through and sit down inside the raw pain they harbor to meditate on two central, urgent questions: what it means to be a man and how, as a man, to love.
Ángel García is the son of Mexican immigrants. Born in Texas and raised in Southern California, his work has been published in The American Poetry Review, Crab Orchard Review, Huizache, and others.
“How could there be tenderness, pleasure and myth, resurrection, and even fur inside rivers—in brutality? This is the book that stands alone in its midnight boldness, its veined shadow secrets. One of the most difficult arts of the poem is to descend into its lightless under-realms, into what lies beneath the elegant surfaces—here Ángel examines our gendered, warring bodies, man, son, lover, husband, father, mother, ghost woman—our stripped down self unmasked, our garbled, foamed and delirious, lonesome acts—our ‘animalia.’ Open this book if you dare. But it is not the animal smashed suddenly, torn away from its innocent gait (that García animates in various forms) that he is redeeming. In his hands, these pages, notice how Ángel García still cups an abandoned child-shaped flame, a night nation perhaps, breathes into it, regardless of its alarming fangs. This is a raw, unsutured, incredible collection. One of a kind—a nose-breaking, heart devouring, blazing volume.”
—Juan Felipe Herrera, Poet Laureate of the United States, 2015–2017


“Toxic masculinity” has become a hot topic in debates over gender and culture, yet one might not think to turn to contemporary poetry as an arena rife with this discourse. And yet, in his uncompromising debut collection, García lays bare the routines of abuse that often repeat themselves over generations: a father walks out on his family; his son becomes a father (twice over by 21) who then treats the women in his life miserably. The result is a speaker who is deeply flawed, often unlikable, at times despicable, yet whose voice is marked, paradoxically, by silence: “my throat / a casket closed and rusted shut.” In response to this silence, the speaker must confront his own urge to flee. When he is discovered cheating on a girlfriend, the speaker’s frailty is revealed: “the shell of me, hung / from a metal hook behind the door, trembling.” Elsewhere, the speaker cleans the apartment while his partner sleeps and recalls his father cooking dinner and crying. In these ways, García’s speaker exposes his own vulnerability and, perhaps, moves toward redemption.
—Diego Báez, Booklist, August 2018

“Teeth Never Sleep, by Ángel García is an auspicious and daring debut by a poet whose attention to the line and the possibilities of well-crafted metaphors is remarkably accomplished. These are poems that appreciate that risk in poetry demands vulnerability, and the quest for truth requires a willingness to excavate the complexities of human emotion and thought. García’s poems about masculinity, displacement, language and desire are powerful and deeply affecting.”
—Kwame Dawes, author of City of Bones

“Writing in both Spanish and English, García cuts across cultures and aesthetics. While poems like ‘Morning Breath,’ ‘Self-Portraits of a Man as Beast,’ and ‘Elegy for What Once Slept in a Cage’ may make some readers uncomfortable, they are well-crafted and unflinchingly honest.”
—David Starkey, Santa Barbara Independent, April 2019

“Teeth Never Sleep is a must read for its devastating imagery of the body lending a kind of concreteness that belies the collection’s commitment to fluidity.”
—Bryon Dickon, American Book Review, May-June 2021