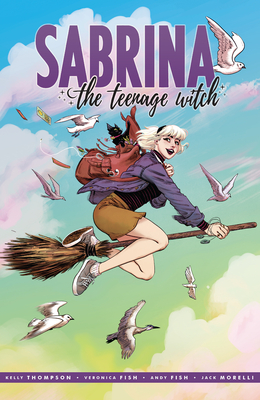 
This title is likely unavailable. Email or call for price and availability.
Kelly Thompson (Uncanny X-Men) and artist Veronica Fish (Spider-Woman, Archie) team-up to tell the story of Sabrina Spellman.

Sabrina is a teen witch who's struggling with balancing the double life of high school and her burgeoning powers. Newly relocated to Greendale with her aunts Hilda and Zelda (also witches), Sabrina is trying to make the best of being the new girl in town which so far includes two intriguing love interests, an instant rivalry, a couple of misfits that could turn into BFFs, and trying to save the high school (and maybe the world) from crazy supernatural events. NBD!
Kelly Thompson is an American writer of novels and comic books. She is best known for the Jem and the Holograms comic with co-creator and artist Sophie Campbell, a modern reimagining of the 1980s cartoon of the same name. Her HAWKEYE run from Marvel was nominated for an Eisner in 2018 and she's currently writing the monthly comics WEST COAST AVENGERS and ROGUE & GAMBIT for Marvel as well as NANCY DREW for Dynamite.

Veronica Fish is an artist based in MA. Her paintings have been shown in galleries around the world, and she's done a lot of neat things like character design, storyboarding for film + TV, apparel design, and editorial illustration. She developed "Helmutt the Dog" for the Worcester Art Museum.

In comics, she has drawn issues of the Archie reboot, Silk, Howard the Duck and Spider-Woman for Marvel. She was also the artist for Pirates of Mars by JJ Kahrs, The Wendy Project by Melissa Osbourne and SLAM! for Boom Studios.