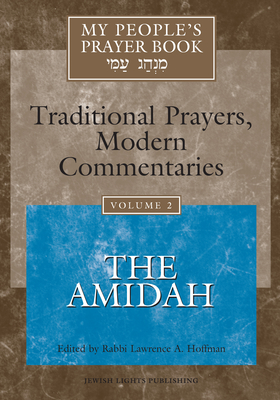 "The prayer book is our Jewish diary of the centuries, a collection of prayers composed by generations of those who came before us, as they endeavored to express the meaning of their lives and their relationship to God. The prayer book is the essence of the Jewish soul."

My People's Prayer Book provides diverse and exciting commentaries to the traditional liturgy, written by some of today's most respected scholars and teachers from all perspectives of the Jewish world. They explore the text from the perspectives of ancient Rabbis and modern theologians, as well as feminist, halakhic, medieval, linguistic, biblical, Chasidic, mystical, and historical perspectives.

This stunning work, an empowering entryway to the spiritual revival of our times, enables all of us to claim our connection to the heritage of the traditional Jewish prayer book. It helps rejuvenate Jewish worship in today's world, and makes its power accessible to all. The My People's Prayer Book series belongs on the library shelf of every home, every synagogue--every sanctuary of prayer.

Introductions tell the reader what to look for in the prayer service, as well as how to truly use the commentaries, to search for--and find--meaning in the prayer book.

Dr. Marc Zvi Brettler is the Dora Golding Professor of Biblical Studies at Brandeis University. He contributed to all volumes of the My People's Prayer Book: Traditional Prayers, Modern Commentaries series, winner of the National Jewish Book Award, and to My People's Passover Haggadah: Traditional Texts, Modern Commentaries; Who by Fire, Who by Water-Un'taneh Tokef; All These Vows-Kol Nidre; May God Remember: Memory and Memorializing in Judaism-Yizkor; and We Have Sinned: Sin and Confession in Judaism-Ashamnu and Al Chet (all Jewish Lights). He is coeditor of The Jewish Annotated New Testament and The Jewish Study Bible, which won the National Jewish Book Award; co-author of The Bible and the Believer; and author of How to Read the Jewish Bible, among other books and articles. He has also been interviewed on National Public Radio's Fresh Air by Terry Gross.