The Ultimate Evil: The Search for the Sons of Sam (Paperback) 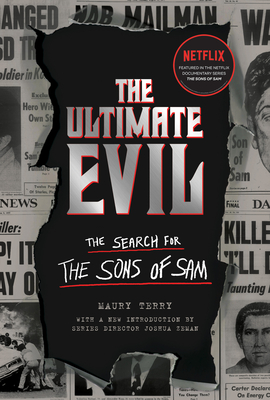 The Ultimate Evil: The Search for the Sons of Sam (Paperback)


On Our Shelves as of 9am Today
The true-crime cult classic that inspired the Netflix docuseries The Sons of Sam: A Descent into Darkness and a companion podcast, The Ultimate Evil follows journalist Maury Terry’s decades-long investigation into the terrifying truth behind the Son of Sam murders.

On August 10, 1977, the NYPD arrested David Berkowitz for the Son of Sam murders that had terrorized New York City for over a year. Berkowitz confessed to shooting sixteen people and killing six with a .44 caliber Bulldog revolver, and the case was officially closed.

Journalist Maury Terry was suspicious of Berkowitz’s confession. Spurred by conflicting witness descriptions of the killer and clues overlooked in the investigation, Terry was convinced Berkowitz didn’t act alone. Meticulously gathering evidence for a decade, he released his findings in the first edition of The Ultimate Evil. Based upon the evidence he had uncovered, Terry theorized that the Son of Sam attacks were masterminded by a Yonkers-based cult that was responsible for other ritual murders across the country.

After Terry’s death in 2015, documentary filmmaker Josh Zeman (Cropsey, The Killing Season, Murder Mountain) was given access to Terry’s files, which form the basis of his docuseries with Netflix and a companion podcast. Taken together with The Ultimate Evil, which includes a new introduction by Zeman, these works reveal the stunning intersections of power, wealth, privilege, and evil in America—from the Summer of Sam until today.
Maury Terry was an award-winning investigative reporter whose work was prominently featured in both television and print media. He wrote for the Gannett newspaper chain, Vanity Fair, Gear, and Penthouse, among others. He reported on and coproduced nearly a dozen national TV specials about the Son of Sam conspiracy. Terry died in Yonkers, New York, in 2015.

Joshua Zeman has been at the forefront of the true crime genre for the past decade. He is the director of the critically acclaimed film Cropsey, the docuseries The Killing Season, and Murder Mountain.
“If the details of the Son of Sam case have always left you wondering if there was more to it, then Terry’s in-depth book will satisfy your curiosity. The Ultimate Evil is a true-crime classic that details one of the most notorious serial killings of all time, connecting the dots to a larger conspiracy.”—Geeks of Doom

“This book isn’t just about Son of Sam...It’s about an author who drove himself into the ground trying to make sense of some of the most brutal crimes in American history. Is what he found true? That’s for you to ponder. But I will tell you, I wasn’t able to put this book down—and neither will you.”—Billy Jensen, author of Chase Darkness with Me