The Walking Dead: The Official Cookbook and Survival Guide (Hardcover) 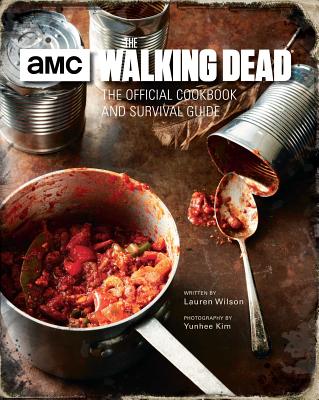 The Walking Dead: The Official Cookbook and Survival Guide (Hardcover)


Available in Warehouse. Wait for Email Confirmation for ETA
Based on the hit AMC television series, this cookbook is packed with life-saving tips and unique recipes inspired by The Walking Dead.

The Walking Dead: The Official Cookbook and Survival Guide details the skills and recipes you need to survive (while avoiding being eaten) during a walker apocalypse. Inspired by the hit AMC television series, the book features recipes for meals featured on the show, plus food and drinks inspired by key characters and locations, along with expert information on foraging, hunting wild game, and outdoor cooking. Featuring familiar treats like Carl’s pudding, Carol Peletier’s baked goods, and Hershel’s spaghetti, this is the ultimate gift for fans and walker-wary survivalists alike.

Lauren Wilson is a professional chef and cookbook author. She graduated with honors from Toronto’s George Brown Chef School in 2008 and currently manages front of house operations at Rose’s Bar & Grill in Brooklyn, NY. She is the author of The Art of Eating Through the Zombie Apocalypse, an illustrated cookbook and culinary survival guide.

Yunhee Kim is a New York based photographer specializing in food, still life, and interior. Her clients are Food Network, Martha Stewart Ominmedia, Parents, West Elm, and most recently Siggi’s Yogurt.
“As fans of The Walking Dead, especially the early seasons, this cookbook is a fantastic trip through the history of the show.”
— 2 Geeks Who Eat

“Along with walkie-talkies, local maps and a hand-crank radio, "The Walking Dead: The Official Cookbook and Survival Guide" is a savvy addition to any survival cache.”

“Brimming with pictures from the hit TV show, it’s filled with tips such as which knives are a must-have for the zombie apocalypse and how to pack your bug-out bag, along with recipes fit for a scrappy survivor on the go."
— Sun Journal

“This cookbook even tells you how to forage and gather what you need for survival, taking the reader through chapters worth of recipes and how to survive in the wilds.”
— TV Over Mind

“The Walking Dead Official Cookbook devotes recipe chapters to breakfast, dinner, “sweet treats,” beverages and food preservation. Reading them, you can imagine the author either binge-watching the show or plumbing the depths of online recaps for any depiction of meals, snacks, gardening or farming, no matter how tenuous, that she can hang a recipe on...The Walking Dead Official Cookbook will likely be more useful than all the other tie-in cookbooks on your shelf.”
— Artsatl.com

“All of the photos and pages look like they are worn and weathered, literally like a shot out of The Walking Dead set.”
— Sweat Pants and Coffee