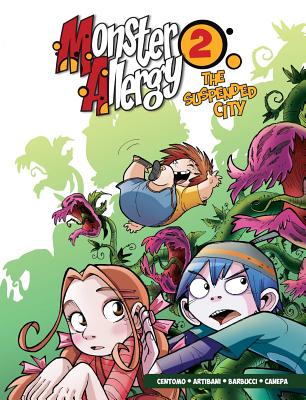 
This title is likely unavailable. Email or call for price and availability.
Zick has a huge secret: He can see invisible ghosts and monsters that no one else can. It’s his job to tame those monsters and protect people. There’s just one problem: Zick is allergic to just about everything—including monsters!

The Monster Allergy adventure continues in this exciting second volume. There’s a giant monster plant growing beneath the streets of Oldmill Village, and what’s worse, Zick’s mystical pet cat and monster tutor, Timothy, has been catnapped! It’s up to Zick and his friend Elena Potato to rescue Timothy and all the other stolen cats—but they won’t find themselves up against any ordinary cat thief.

The despicable Magnacat might look like a normal businessman, but he’s actually a shape-changing Gorka—one of a dangerous race of monsters that can take any form and control people’s minds! Magnacat is determined to take over the peaceful monster city of Bibbur-Si and is hunting down special cats like Timothy to do it. Zick will have to rely on all his newfound monster-taming powers if he’s to defeat Magnacat, but will it be enough? Find out in Monster Allergy, Vol. 2!

Katja Centomo is written for a number of children’s cartoons, comics, and fiction books in Italy. She is most well known for her work on the internationally successful comic series, Monster Allergy, in addition to her graphic novel series Lys and her fiction works, Tilly Duc and Franca Viola.