Flame and Crimson: A History of Sword-and-Sorcery (Paperback) 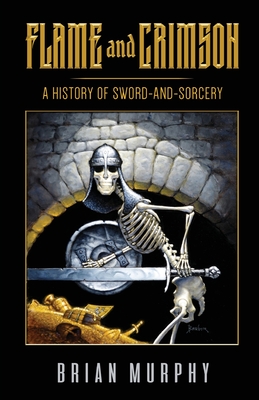 Flame and Crimson: A History of Sword-and-Sorcery (Paperback)


Available in Warehouse. Wait for Email Confirmation for ETA
This book cannot be returned, cancelled, or exchanged. Please call for availability and pricing
The Many Children of Conan

Little did then-obscure Texas writer Robert E. Howard know that with the 1929 publication of "The Shadow Kingdom" in the pulp magazine Weird Tales, he had given birth to a new and vibrant subgenre of fantasy fiction.

Sword-and-sorcery went from pulp obscurity to mass-market paperback popularity before suffering a spectacular publishing collapse in the 1980s. But it lives on in the broader culture and today enjoys a second life in popular role-playing games, music, and films, and helped give birth to a new literary subgenre known as grimdark, popularized by the likes of George R.R. Martin's A Song of Ice and Fire fantasy series.

Flame and Crimson: A History of Sword-and-Sorcery provides much-needed definitions and critical rigor to this misunderstood fantasy subgenre. It traces its origins in the likes of historical fiction, to its birth in the pages of Weird Tales, to its flowering in the Frank Frazetta-illustrated Lancer Conan Saga series in the 1960s. It covers its "barbarian bust" beneath a heap of second-rate pastiche, a pack of colorful and wildly entertaining and awful sword-and-sorcery films, and popular culture second life in the likes of Dungeons & Dragons and the bombast of heavy metal music.