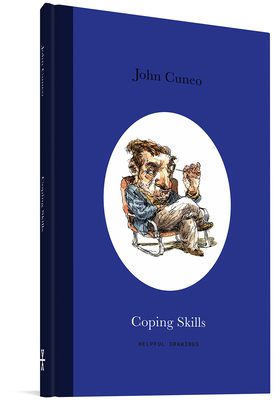 When John Cuneo isn’t gracing the cover of The New Yorker, being featured in Esquire, or winning every illustration award known, he fills a plastic container with drawings labeled “Loose Sketches.” He explains that these pieces are not categorized by anything else than “it simply means they are untethered.” And, boy, are they! Coping Skills collects these scenes of domesticated manatees, climate change, sex — lots and lots of sex — and many more of these “helpful drawings” by one of the best illustrators in the world.

John Cuneo (born January 4, 1957) is an American illustrator, whose work has appeared in many major publications, including The New Yorker, Esquire, Sports Illustrated and The Atlantic Monthly. He has been awarded several medals from the Society of Illustrators in New York City.[1] He is also the author of the 2007 book nEuROTIC.[2]
John Cuneo looks with gentle open all-seeing eyes at the foibles, vanities, and failings of humanity and draws what he sees. Like the best surrealists, he is a realist. His art is scabrous and loving and exact.
— Neil Gaiman

John Cuneo is one of the greatest satirists ever to put pen to paper. He's not only an amazing artist, but he can write and he can think. Acerbic, hilarious, and dark as the universe will be in a trillion trillion years (approx.).
— Roz Chast, Can't We Talk About Something More Pleasant?

Complex and hilarious, fearless and shocking, there's no one like Cuneo in the field of illustration today. Perhaps there never was. I laughed out loud several times reading this book. It's hard to understand how drawings can simultaneously be so wildly imaginative and so excruciatingly true.
— David Apatoff - Illustration Art