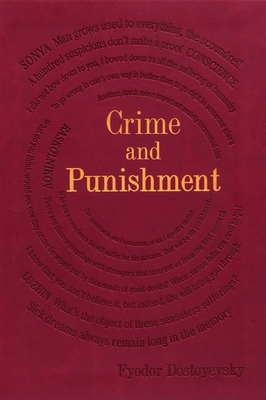 By Fyodor Dostoyevsky, Constance Garnett (Translated by)
$14.99
On Our Shelves as of 9am Today

This classic Russian novel has it all: murder, suspense, passion, struggle, and redemption.


Originally published in 1866, Crime and Punishment is a psychological thriller that deals with issues of morality, conscience, and redemption. Widely considered to be one of the greatest novels written in any language, this novel explores the life of Rodin Raskolnikov, a young Russian man who robs and murders a pawnbroker to save himself from a life of poverty. As a consequence, he must deal with the oppressive mental anguish of being a criminal while attempting to maintain relationships with his friends and family.

Fyodor Dostoyevsky is considered one of the greatest novelists of all time. Born in Moscow in 1821, he began adulthood by resigning a commission as a military engineer to embark on a writing career. The praise he earned for his first novel, Poor Folk, immediately vaulted him to literary stardom. His political activity led to imprisonment, a mock execution, and exile to a Siberian prison camp, all of which shaped his later novels. Since his death in 1881, he has been best remembered for his novels Crime and Punishment and The Brothers Karamazov.

Constance Garnett (1861–1946) was an English translator of nineteenth-century Russian literature.