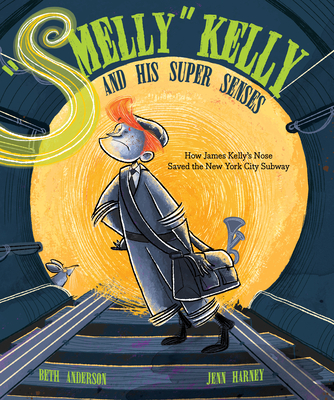 James "Smelly" Kelly used his super-senses and intelligence to make sure that the New York City subway in the 1930s ran safely throughout his lifetime and beyond.

James Kelly smelled EVERYTHING: rats in the shed; circus elephants a mile away; tomorrow's rain. His sense of smell was EXTRAORDINARY. But what good was a powerful nose? How could his super-sniffer make him special? In the New York City subway, James found his calling--and earned the nickname "Smelly" Kelly. Armed with his super-sniffer and the tools he invented, he tracked down leaks from the dangerous to the disgusting, from the comical to the bizarre. Then, he sprang into action to prevent cave-ins and explosions in the tunnels beneath the city. Smelly Kelly not only hunted leaks but also saved lives--and he discovered the truly extraordinary power inside him. Beth Anderson's fast-paced text and Jenn Harney's comical illustrations bring to life this everyday superhero.
Beth Anderson earned a B.A. in Linguistics and a M. Ed. in Reading. She taught English as a second language for more than 20 years. She is the author of An Inconvenient Alphabet, Ben Franklin & Noah Webster's Spelling Revolution, and Calkins Creek's Lizzie Demands A Seat!

Illustrator and toy designer Jenn Harney is the illustrator of Never Trumpet with a Crumpet, Underwear!, and the "Hazy Bloom" series. She is the author/illustrator of Swim Swim Sink to be published in Spring 2020.
"Mild-mannered James Kelly had a keen sense of smell, but what good was an 'extraordinary nose'—a superpower, really—when what he needed was to sniff out a new job in New York City? Anderson’s lively telling of a little-known story (who ever knew there was a heroic leak-smelling detective in the 1930s who saved the city with his nose?) employs strong, active verbs, as any superhero tale does, and is effectively complemented by digital illustrations that bring to life Kelly’s subterranean realm—the blue-black subway, the greenish miasmic smells drifting along, and Smelly Kelly’s red hair, a beacon in the darkness." —The Horn Book

"A tribute to the New York City subway’s first official 'leak detective.' Gifted with a literal nose for trouble, James Kelly arrived in New York from Ireland 'with nothing but a suitcase and a keen sense of smell'—and leveraged the latter into a long career over the first half of the 20th century sniffing out dangerous gas, water, steam, and other leaks in the subway system and elsewhere. Anderson casts him in a heroic mold, as he had not only a special ability, but the inner motivation to use it in service to public safety. Depicted with a confident smile and a mop of bright orange hair, Kelly shines as he goes after suggestive twists and curls of miasmic yellowish green in the illustrations’ succession of antique-looking street scenes and cross-sectional views of underground pipes and tunnels. Another immigrant gets the job done." — Kirkus Reviews