To the Fairest Cape: European Encounters in the Cape of Good Hope (Hardcover) 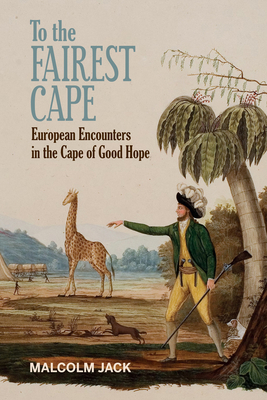 To the Fairest Cape: European Encounters in the Cape of Good Hope (Hardcover)


Available in Warehouse. Wait for Email Confirmation for ETA
Crossing the remote, southern tip of Africa has fired the imagination of European travellers from the time Bartholomew Dias opened up the passage to the East by rounding the Cape of Good Hope in 1488. Dutch, British, French, Danes, and Swedes formed an endless stream of seafarers who made the long journey southwards in pursuit of wealth, adventure, science, and missionary, as well as outright national, interest. Beginning by considering the early hunter-gatherer inhabitants of the Cape and their culture, Malcolm Jack focuses in his account on the encounter that the European visitors had with the Khoisan peoples, sometimes sympathetic but often exploitative from the time of the Portuguese to the abolition of slavery in the British Empire in 1833. This commercial and colonial background is key to understanding the development of the vibrant city that is modern Cape Town, as well as the rich diversity of the Cape hinterland.

Published by Bucknell University Press. Distributed worldwide by Rutgers University Press.
Malcolm Jack is an author, critic and university lecturer. His books include Corruption & Progress: the Eighteenth-Century Debate (1989);William Beckford: An English Fidalgo (1996); Sintra: A Glorious Eden (2002); and Lisbon: City of the Sea (2007). Brought up in Hong Kong, he had a career in the British Parliament and also writes and advises on constitutional matters. He is a contributor to the Bulletin of the National Library of South Africa, Cape Town where he has a home. He was appointed KCB in 2011 and FSA in 2012.
"Following a wide selection of visitors to the Cape, ranging from scientists to missionaries, this ground-breaking study centres in the experience of cross-cultural encounter in the colony covering the period from Van Riebeeck’s momentous importation of slaves to the official abolition of slavery in the 1830s. An authority on the European enlightenment and on constitutional law, Malcolm Jack brings exceptional critical resources to bear on a body of writing that is uniquely rich and full of implication. Crammed with new insights, and enlivened by arresting detail, this is a book that will appeal to the general reader as much as to the scholar."
— Peter Knox-Shaw

"Anyone interested in travellers’ accounts will want to read Malcolm Jack’s lively and well-researched discussion of how visitors, from the Portuguese in the late 15th century to Lady Herschel in the 1830s, viewed the Cape and its people. Along with the sometimes colourful accounts the travelers gave of what they saw as the exotic landscape, fauna and flora of the Cape, Malcolm Jack focuses on their perceptions of the indigenous Khoisan, perceptionsthat helped shape the way the early colonial society developed."
— Chris Saunders

"Malcolm Jack identifies three broad themes in the history of travel literature to the Cape: the Adamastor myth invented by the Portuguese epic poet de Camoëns; the myth of Paradise Lost and of the Noble Savage (a preoccupation of French writers); and the Arcadian image created by British colonial diarists transported by the beauty of the unfamiliar land. To guide the reader Malcolm Jack has chosen a select number of these adventurous authors. He charts their experiences and records their anecdotes and insights — subjective insights seldom to be found in the pages of conventional history books."
— Jeremy Lawrence

"Beginning with hunter-gatherer inhabitants of the Cape and their culture, Jack focuses on the encounter that the European visitors had with the Khoisan peoples, sometimes sympathetic but often exploitative from the time of the Portuguese to the abolition of slavery in the British Empire in 1833. This commercial and colonial background is key to understanding the development of the vibrant city that is modern Cape Town, as well as the rich diversity of the Cape hinterland."
— The Society of Antiquaries of London Online Newsletter

"For European visitors who called at the Cape in past centuries its "otherness" - the iconic mountain, the unusual fauna and flora, the indigenous people and their alien culture - was forever the subject of wonder. This sense of awe is strongly evoked in Malcolm Jack's new book."
— Cape Times

"This commercial and colonial background is key to understanding the development of the vibrant city that is modern Cape Town, as well as the rich diversity of the Cape hinterland."
— PEN South Africa

"This skillfully marshalled and elegantly recounted history opens up new pathways into the European cultural and intellectual past whilst underlining the mystical, mesmeric power of the Cape, that 'master link of connection between the western and eastern world.'"
— The Bulletin of the National Library of South Africa

"This book is a gift for anyone who is interested in the people of the world living together. It is written in elegant prose and makes its concern pointedly clear. Apart from the people, it is the impressive landscape and nature of South Africa which fascinates the author and for which he finds heavenly words. It is essential to see these features of the overall picture because they gave the people living there for thousands of years a functioning place to live. The book points out strongly that the unity between people and the land was destroyed by the Europeans, but the author avoids any moral indignation and lets the facts alone speak for themselves. The reader who is less familiar with the history of South Africa feels at least at this point the wish to know the country more intensely."
— Jahrbuch fur Europäische Überseegeschichte