Hemispheres and Stratospheres: The Idea and Experience of Distance in the International Enlightenment (Transits: Literature, Thought & Culture 1650-1850) (Hardcover) 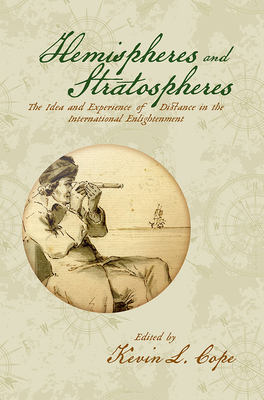 Hemispheres and Stratospheres: The Idea and Experience of Distance in the International Enlightenment (Transits: Literature, Thought & Culture 1650-1850) (Hardcover)


This title is likely unavailable. Email or call for price and availability.
Recognizing distance as a central concern of the Enlightenment, this volume offers eight essays on distance in art and literature; on cultural transmission and exchange over distance; and on distance as a topic in science, a theme in literature, and a central issue in modern research methods. Through studies of landscape gardens, architecture, imaginary voyages, transcontinental philosophical exchange, and cosmological poetry, Hemispheres and Stratospheres unfurls the early history of a distance culture that influences our own era of global information exchange, long-haul flights, colossal skyscrapers, and space tourism.

Kevin L. Cope is Adams Professor of English Literature and a member of the comparative literature faculty at Louisiana State University. Among his many books and edited collections are Criteria of Certainty, John Locke Revisited, and In and After the Beginning. He is also editor of the annual journal 1650–1850: Ideas, Aesthetics, and Inquiries in the Early Modern Era.
“In eight wide-ranging essays by prominent scholars, this groundbreaking collection challenges how Enlightenment and long-eighteenth-century researchers need to reassess the interdisciplinary nature, cultural richness, and international scope of this topic. The study ventures into new territories in the international and cultural terrain of distance studies, uncovering uncharted research and future prospects in the digital humanities.”
— Mark Pedreira

“With his characteristic intellectual amplitude, Kevin L. Cope presents in this volume essays on the eighteenth-century ‘prospect’ in art and literature, the function of distance in Italian architecture, the European travel of two South Indian priests, the dislocations and adaptations of ‘long distance’ imaginary voyages, and the possible advantages of ‘distant’ reading—among others. While novel in its core supposition, the volume pays respect to an older, distinguished scholarly orientation that is perfectly in line with our own multidisciplinary moment: the history of ideas.”
— John Scanlan