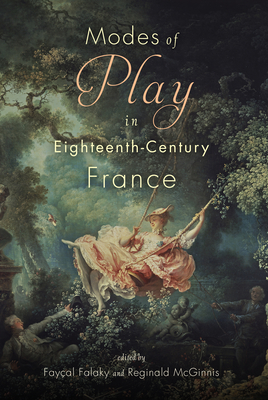 
This title is likely unavailable. Email or call for price and availability.
Collecting diverse critical perspectives on the topic of play—from dolls, bilboquets, and lotteries, to writing itself—this volume offers new insights into how play was used to represent and reimagine the world in eighteenth-century France. In documenting various modes of play, contributors theorize its relation to law, religion, politics, and economics. Equally important was the role of “play” in plays, and the function of theatrical performance in mirroring, and often contesting, our place in the universe. These essays remind us that the spirit of play was very much alive during the “Age of Reason,” providing ways for its practitioners to consider more “serious” themes such as free will and determinism, illusions and equivocations, or chance and inequality. Standing at the intersection of multiple intellectual avenues, this is the first comprehensive study in English devoted to the different guises of play in Enlightenment France, certain to interest curious readers across disciplinary backgrounds.
FAYÇAL FALAKY is an associate professor of French at Tulane University in New Orleans, Louisiana, where he specializes in eighteenth-century French literature, culture, and politics. He is the author of Social Contract, Masochist Contract: Aesthetics of Freedom and Submission in Rousseau.

REGINALD MCGINNIS is a professor of French at the University of Arizona in Tucson. He is the author of Essai sur l'origine de la mystification and a book, co-authored with John Vignaux Smyth, titled Mock Ritual in the Modern Era. Current projects include a book on the abbé Edme Mallet.
"Bringing together game studies and 18th-century French studies, Modes of Play in Eighteenth-Century France is a most welcome contribution to the study of French literature, history, and culture. The collection introduces us to understudied works and provides fresh approaches to canonical texts, broadening our understanding of the interaction between play, culture, and politics."
— Tracy Rutler