The Enemy Within: How a Totalitarian Movement is Destroying America (Hardcover) 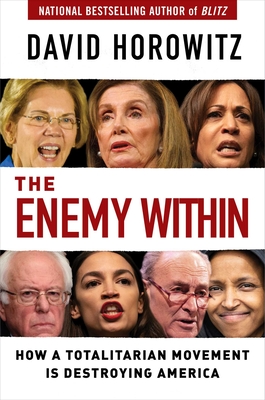 The Enemy Within: How a Totalitarian Movement is Destroying America (Hardcover)


Available in Warehouse. Wait for Email Confirmation for ETA
“The Enemy Within is a book for all patriots who understand that our country is in a fight for its life.”—MARK LEVIN

America on the Brink

A questionable election. The president of the United States illegally impeached—twice—and silenced. The First Amendment hanging by a thread. The national heritage under attack. Mob violence. America is on the brink of becoming a one-party dictatorship.

How did this happen?

The Enemy Within: How a Totalitarian Movement Is Destroying America provides the answer. David Horowitz has been the bête noire of the Left for decades on account of his courageous revelations of their aims and tactics, and now he sounds the alarm: the barbarians are already inside the gates.

Horowitz lays out how we have ended up in the worst national crisis since the Civil War. He details:

• The decades-long infiltration of our education system by ideologies hostile to America, our institutions, and our freedom

• Their political exploitation of the coronavirus pandemic

• Their complicity in the riots of the summer of 2020, which left twenty-five dead, injured two thousand police officers, caused billions of dollars in property damage, and revealed the fragility of our civic order

As Abraham Lincoln so presciently warned on the eve of America’s last existential crisis, “If destruction be our lot, we must ourselves be its author and finisher. As a nation of freemen, we must live for all time, or die by suicide.” In The Enemy Within, David Horowitz provides a spot-on assessment of the threat to the American Republic and points to an escape route—while there’s still time.
David Horowitz is a noted conservative commentator and a national bestselling author. He is the founder and CEO of the David Horowitz Freedom Center in Los Angeles and the author of Big Agenda, Radical Son, and The Black Book of the American Left.