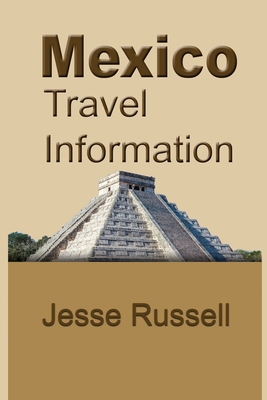 
Available in Warehouse. Wait for Email Confirmation for ETA
This book cannot be returned, cancelled, or exchanged. Please call for availability and pricing
Mexico Travel Information. Tourism. A country with rich history, Mexico is home to unique sights of ancient civilizations. The country attracts not only fans of hot countries and beach rest, but also people who are keen on history, numerous scientists and archaeologists. In Mexico you can see the internationally famous Mayan pyramids, Aztec monuments and ancient settlements mentioned in many legends and mysterious stories. Those, who want to see settlements of old tribes with their own eyes, should definitely make a trip to pyramids of Teotihuacan. The largest two pyramids are located in this "ghost city". These are the pyramids of Moon and Sun, the height of which estimates 150 and 225 metres respectively. The temple of Quetzalcoatl, the most powerful and honoured god according to Maya, is located nearby. One more ancient building that is worth visiting is located in Cholula. This is Cholula Pyramid, which size once exceeded the size of the pyramid of Cheops. The Cholula Pyramid was partially destroyed, but it looks very impressive even nowadays. Several interesting buildings can be found in the cities of Chichen Itzā, El Tajin, Palenque, Tikal, Xel-Ha, Xcaret and Uxmal. Mexico City, which was founded in 1325, is a true open air museum. Nowadays, there are as many as 1400 historic landmarks in the city. Its territory is home to 10 archaeological zones and more than 80 museums. Start your observation of the city with a visit to El Zocalo Square to enjoy numerous old houses, mansions of the colonial period and buildings of the Aztec times that have miraculously survived till our days. The Metropolitan Cathedral is one of the most beautiful buildings of the medieval period. This is the largest church of its type in whole Latin America. The National Palace is a well-known masterpiece of architecture. The fa ade and halls of the palace are decorated with beautiful frescos.