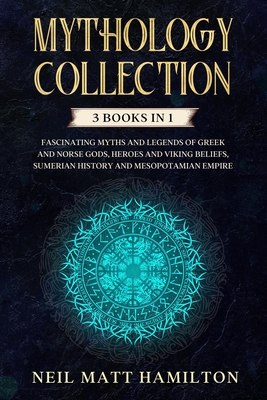 
Available in Warehouse. Wait for Email Confirmation for ETA
This book cannot be returned, cancelled, or exchanged. Please call for availability and pricing
This book includes:

Norse Mythology: Fascinating Myths and Legends of Norse Gods, Heroes, and Viking Beliefs explores the Norse Gods and the Viking belief system through the tales told by people living at the time. They told tales about the formation of the universe, about how the universe was divided, and how the Gods and giants made war with one another. Because the Viking belief system was reflected in these tales about their Gods and historical figures, learning about the Gods and heroes in this way allows the reader to understand who the Vikings were and why they were.

Sumerian Mythology: Fascinating Sumerian History and Mesopotamian Empire and Myths explore the tales of gods and heroes in a concise, easy-to-read fashion. These tales of heroes and gods were deeply important to the Mesopotamian people and learning about them is the only way to understand the kind of world they lived in and how it was different from our own. It was a world of birds with the faces of lions, gods with the wings of birds, and seductive goddesses who symbolically married the kings of the various city-states. The Sumerians told many tales of gods like Inanna, An, Ashur, and Enlil, tales that helped the civilizations of Mesopotamia endure for nearly 4000 years. Indeed, European travelers to the Orient in the 18th century discovered that there were still districts where the goddess Inanna (more than five thousand years old then) was still worshipped in secret.

Buy now to embark on a fascinating exploration of the world of Greek, Norse and Sumerian myth and legend.