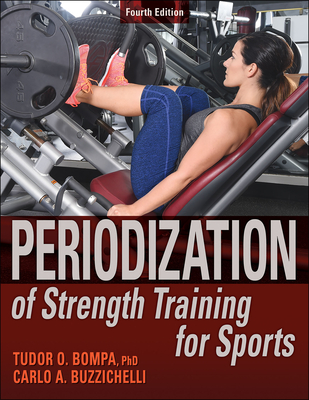 Tudor Bompa revolutionized Western training methods when he introduced his groundbreaking theory of periodization in Romania in 1963. He has since gone on to become a world-renowned exercise scientist and the foremost authority on periodization and the development of biomotor abilities. In Periodization of Strength Training for Sports, Fourth Edition, Bompa partners with international strength and conditioning expert Carlo Buzzichelli to go beyond the simple application of bodybuilding or powerlifting programs to show you what training to schedule—and when—to build athletic strength and maximize performance at the right time.

Periodization of Strength Training for Sports demonstrates how to use periodized workouts to peak at optimal times by manipulating strength training variables through six training phases—anatomical adaptation, hypertrophy, maximum strength, conversion to specific strength, maintenance, and peaking. Coaches and athletes in 30 sports now have at their fingertips proven programs that take into consideration the specific phases and unique demands of their sport, along with information about the dominant energy system, limiting factors for performance, and objectives for strength training. No more guessing about preseason conditioning, in-season workloads, or rest and recovery periods—now it’s simply a matter of implementing the strategies in this book.

Rather than experiment with untested training regimens, let the proven science and ready-made training schedules go to work for you. Periodization of Strength Training for Sports eliminates the guesswork and establishes a clear path to achieving the best results for peaking at the ideal time.

CE exam available! For certified professionals, a companion continuing education exam can be completed after reading this book. The Periodization of Strength Training for Sports Online CE Exam may be purchased separately or as part of the Periodization of Strength Training for Sports With CE Exam package that includes both the book and the exam.
Tudor O. Bompa, PhD, revolutionized Western training methods when he introduced his groundbreaking theory of periodization in his native Romania in 1963. He has personally trained 11 Olympic medalists (including 4 gold medalists) and has served as a consultant to coaches and athletes worldwide.

Bompa’s books on training methods, including Theory and Methodology of Training: The Key to Athletic Performance and Periodization, have been translated into 19 languages and used in more than 180 countries for training athletes and for educating and certifying coaches. Bompa has been invited to speak about training in 46 countries and has been awarded certificates of honor and appreciation from such prestigious organizations as the Ministry of Culture of Argentina, the Australian Sports Council, the Spanish Olympic Committee, the National Strength and Conditioning Association (2014 Alvin Roy Award for Career Achievement), and the International Olympic Committee.

A member of the Canadian Olympic Association and the Romanian National Council of Sports, Bompa is a professor emeritus of York University, where he began teaching training theories in 1987. In 2017, Bompa was awarded the honorary title of doctor honoris causa in his home country of Romania.

Buzzichelli’s coaching experience includes the 2002 Commonwealth Games; the 2003, 2017, and 2019 World Track and Field Championships; and the 2016 Summer Olympics. As a strength and conditioning coach for team sports, his three senior teams in two different sports (volleyball and soccer) have achieved a total of five promotions in five seasons. As a coach of individual sports, Buzzichelli’s athletes have won more than 50 medals at national championships in four sports (track and field, swimming, Brazilian jiujitsu, and powerlifting), set 10 national records in powerlifting and track and field, and won 15 medals at international competitions. In 2015, Buzzichelli coached two Italian champions in two different sports; in 2016, two of his athletes earned international titles in two different combat sports.
“Periodization of Strength Training for Sports can be used as a guide for coaches as well as for athletes who want to reach their full potential and avoid overtraining and injuries. I designed my annual training plan according to this book, and it helped my 3×3 basketball team achieve a #1 world ranking.”
—Darko Krsman, MSc, ISCI-SSC, CSCS, Strength and Conditioning Coach, Coach of FIBA’s Top-Ranked 3×3 Basketball Team

“Bompa is one of the founding fathers of sports training methodology, and his Periodization of Strength Training for Sports, wonderfully revised with Buzzichelli’s input, lays out a framework for how to maximize the strength, speed, and endurance of athletes.”
—Tom Farrow, Physical Performance Specialist, Founder and Codirector of Areté Performance