Women in Congress, 1917-2018: Service Dates and Committee Assignments by Member, and Lists by State and Congress (Paperback) 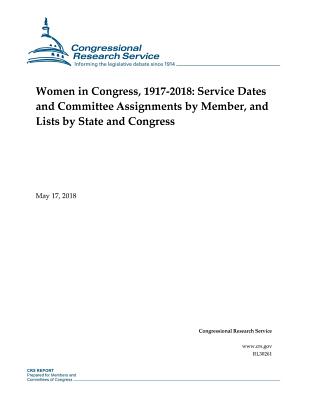 Women in Congress, 1917-2018: Service Dates and Committee Assignments by Member, and Lists by State and Congress (Paperback)


This title is likely unavailable. Email or call for price and availability.
n total, 329 women have been elected or appointed to Congress, 212 Democrats and 117 Republicans. These figures include six nonvoting Delegates, one each from Guam, Hawaii, the District of Columbia, and American Samoa, and two from the U.S. Virgin Islands, as well as one Resident Commissioner from Puerto Rico. Of these 329 women there have been 277 (178 Democrats, 99 Republicans) women elected only to the House of Representatives; 40 (25 Democrats, 15 Republicans) women elected or appointed only to the Senate; 12 (9 Democrats, 3 Republicans) women who have served in both houses. A record 112 women currently serve in the 115th Congress. Of the 112 women there are 23 in the Senate (17 Democrats and 6 Republicans); 89 in the House (64 Democrats and 25 Republicans); 5 women in the House (3 Democrats and 2 Republicans) who serve as Delegates or Resident Commissioner, representing the District of Columbia, Guam, American Samoa, the U.S. Virgin Islands, and Puerto Rico. This report includes committee assignments, dates of service, district information, and listings by Congress and state, and (for Representatives) congressional districts of the 329 women who have been elected or appointed to Congress. It will be updated when there are relevant changes in the makeup of Congress.