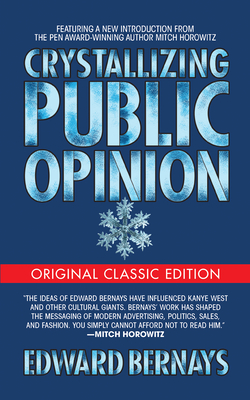 
Available in Warehouse. Wait for Email Confirmation for ETA
This book cannot be returned, cancelled, or exchanged. Please call for availability and pricing
Edward Bernays' 1923 classic Crystallizing Public Opinion set down the principles that corporations and governments have used to influence public attitudes over the past century.
Edward Louis Bernays was an Austrian-American pioneer in the field of public relations and propaganda, referred to in his obituary as "the father of public relations". Bernays was named one of the 100 most influential Americans of the 20th century by Life.