Jemimas Assemble!: Women of Color Who Sell Out the Race (Paperback) 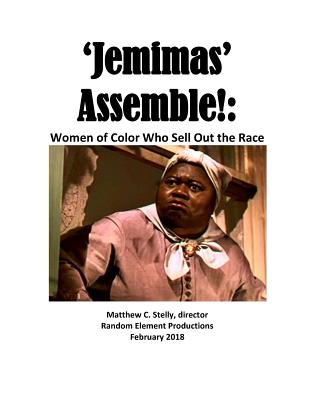 Jemimas Assemble!: Women of Color Who Sell Out the Race (Paperback)


Available in Warehouse. Wait for Email Confirmation for ETA
This book cannot be returned, cancelled, or exchanged. Please call for availability and pricing
A scholar named Doneghy (2018) offered an excellent article on the history of Aunt Jemima and the image. Of key importance was the following statement: Aunt Jemima was first introduced as a character in a minstrel show - an American form of entertainment developed in the late 19th century. Each show consisted of comic skits, variety acts, dancing, and music. The shows were performed by white people in blackface for the purpose of playing the roles of black people. Minstrel shows portrayed black people as dimwitted, lazy, easily frightened, chronically idle, superstitious, happy-go-lucky buffoons. (Doneghy, 2018 - emphasis added) So in other words, Aunt Jemima's image was conceived in a racist, negative portrayal of black folks. Those minstrel shows were the white man's way of degrading African people. To them it was "entertainment" in the way that watching blacks form "prayer vigils" and "protests" against the racism that has always been there is also a barrel of laughs. The concept of blacks as lazy, easily frightened, and the rest remains behind although it has been fine-tuned. But the concept of the "buffoon" is alive and well and some of the black women highlighted in this book make that point amazingly clear with their comments and actions. You see them in every city and scenario: the so-called "black leaders" (known back in the day as "negro leaders"). These people are either self-appointed or they somehow get the white stamp of approval from some white man. If they help out with an election, they'll get a position, a title and maybe a set of keys that don't fit anything. If they side with the white man publicly, they'll be rewarded. If they're ministers or represent a bunch of passive black people in some religious setting, they'll get paid under the table to continue to do the bidding of the system. Milwaukee is full of them, from the state legislatures to the common council; Dallas has them at the Congressional level as well as the county and city council; and Omaha even has a few. In all these cases these opportunistic people can openly sell out the black community and continue to get away with it. These are today's "house negroes." The world sees Black people in America as a group that they are related to, but as a group that is passive and opportunistic. Many of them wonder "why don't you have any power?" or "why aren't you doing better?" The fact is that black people have become passive and smugly satisfied with the crumbs from the white man's table. So beaten down from over 300 years of enslavement - an experience that would have eliminated most other groups - Africans trapped in America nevertheless survived but a part of that enslavement experience was a dehumanization process that included a massive brainwashing. No other slve system in history was as brutal and as psychologically damaging as the one that white people placed on African people in the Americas. Today in 2018, black people are still staggering from the effects of that dehumanization process. There are those of us out there seeking to provide information and motivate, answering questions that are people pose out of ignorance and fear. You hear the same questions time and time again, and even when solutions are provided - such as those in my books - fear takes over and black people scurry to the one institution that has duped them for centuries and that they continue to be beholden to: the black church. This book names those African-American beauties who have been co-opted, on some level, by the system that oppresses us all. There are tens of thousands more. You know who you are.
Matthew C. Stelly is a doctoral student at the University of Wisconsin-Milwaukee working on a degree in Urban Education and Community Policy. He holds three Master's degrees: Urban Studies (1982), Urban Education (1983) and Political Science (2000). He is working toward his doctorate in Community Policy/Urban Education at the University of Wisconsin-Milwaukee. He is the former editor of the Milwaukee Courier newspaper, former director of the Great Plains Black Museum and the Plano (TX) African American Museum, and lead archivist for The Black Academy of Arts and Letters (TBAAL) in Dallas, Texas. Stelly has more than 2,500 articles in print and has won two national essay competitions. He is the founding director of the largest African-American neighborhood group in Nebraska, the Triple One Neighborhood Association and Parents Union. He is publisher and editor of the Triple One News, a two-time nationally recognized newsletter. He is the father of five children - Mandla, Malik, Clariece, Charisse and Shannon -- and remains actively involved in community organizing and neighborhood development in several cities, including Milwaukee and Omaha.