Abuses of Socialism Are Intolerable (Paperback) 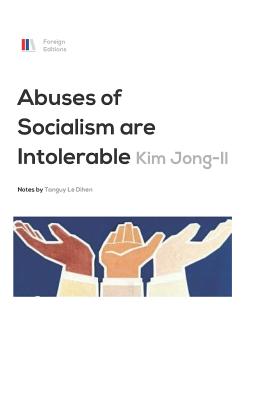 By Tanguy Le Dihen (Foreword by), Kim Jong-Il
$11.99
Usually Ships in 1-5 Days
This book cannot be returned, cancelled, or exchanged.

The Atomic Energy Agency drives several inspections in the country in 1992 and 1993. The IAEA is an international organization under the auspices of the UN, it reports annually to the UN General Assembly.But in 1993, North Korea refuses to visit secret bases and threatens to leave the Nuclear Non-Proliferation Treaty.In May 1993, North Korea launched a Rodong missile that completed its course in the Sea of Japan (called the East Sea by the Koreans).The country is under the dictatorship of the founder and leader of North Korea since 1948: Kim Il Sung. The Supreme People's Assembly proclaimed him "the eternal President of the Republic" after is death. His song Kim Jong-Il had a discourse about Socialism. It was initialy published in Kulloja, Official Magazine of the Central Committee of the Workers - Party of Korea, the March 1, 1993.The editor went to North Korea to retrieve this republished material that begin with this words: