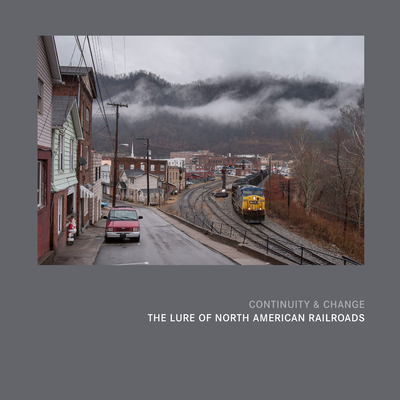 Railroads and photography came of age together in the nineteenth century and share a dynamic relationship in the twenty-first. That relationship flows from the traditions of both commercial photography and photojournalism, and it is defined today by the paradox of continuity and change.

This landmark publication explores that paradox--and the contemporary nature of the North American railroad--in more than 230 photographs and thirteen essays. They delve into a wide range of topics: railroads and nature, pathways of commerce, passenger railroading, heritage activities, workers, international connections, the allure of continent-crossing networks, and how the passage of time marks both railroads and photography. That last notion is at the heart of this book. Railroads invented standardized time, time came to govern railroads, and photography records moments in time.

The nature of visible changes on the railroad is often that of great steps followed by long plateaus, and this nature can imbue the railroad with a false sense of continuity. Yet more changes always come. Photographers portray these changes over time, capturing visual records of the present before it becomes the past. They seek the bold, new innovations as well as the relics of anachronism. Although recent changes to the railroad have made its equipment more homogenous, its landscape more sterile, and its impact more hidden, these photographs show that the modern railroad is still dramatic, bold, diverse, evocative, and utterly vital to the global economy.

Drawing from the Center for Railroad Photography & Art's talented community of image-makers and from their own lifelong interests in railroads and the visual arts, editors Alexander Craghead and Scott Lothes present a stunning body of work. It commemorates the Center's 25th anniversary while making a compelling case that the union of railroads and photography is as rich and potent as ever.

Scott Lothes is the president and executive director of the Center for Railroad Photography & Art and editor of its journal, Railroad Heritage. He is also a prolific photographer and author with more than seventy bylined articles in magazines including Classic Trains, NRHS Bulletin, Railfan & Railroad, Railroads Illustrated, and Trains, as well as front-page travel stories in the Sunday Oregonian, Portland, Oregon's leading newspaper. He is the author and editor of The Railroad Photography of Donald W. Furler, editor of Significant Images of Railroading, coauthor of Wallace W. Abbey: A Life in Railroad Photography, and contributor of forewords or chapters to four other books. He lives in Madison, Wisconsin, with Maureen Muldoon, his wife, and Maddie, their dog. Alexander Craghead is a curator, photographer, essayist, and historian who writes about the intersection of technology, representation, and landscape. He lives in Oakland, California, holds a Ph.D. degree in architectural history from the University of California, Berkeley, and teaches for its program in American Studies. His work has appeared in numerous regional and national publications, including Boom: A Journal of California, California History, Railfan & Railroad, Railroad Heritage, and The Smart Set. He is the author of The Railway Palaces of Portland, Oregon: The Architectural Legacy of Henry Villard, and he is a co-editor of The Railroad and the Art of Place: An Anthology.