Walking Through the Fire: My Fight for the Heart and Soul of America (Hardcover) 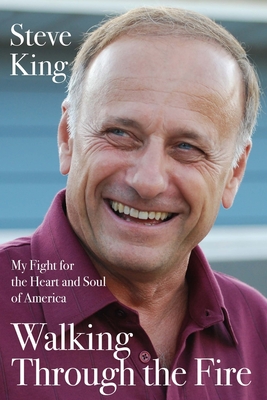 Walking Through the Fire: My Fight for the Heart and Soul of America (Hardcover)


Available in Warehouse. Wait for Email Confirmation for ETA
Just two weeks after winning reelection to his ninth term in Congress, Steve King was stunned to learn the “Swamp” was poised to unleash a treacherous media blitzkrieg designed to kill his Congressional political career on the spot. The words, “They believe they can force you to resign” ring in his ears yet today. He knew Democrats and the media would pile on. Unfortunately, the threat was from within his party and it was far more dangerous. The Republican establishment, RINOs, elitists, globalists, and NeverTrumpers needed him out of the way. This is the full story.
Born into a law enforcement family, Steve King was steeped early in the Constitution and the Rule of Law. He came to be known as the “Conscience of Conservatives” in Congress. The most precious to him are his wife of forty-nine years, their three sons, their wives, and eight grandchildren. His very successful life’s work came crashing down in a stunning display of the treachery of the “Swamp.”
“Steve King experienced the quagmire of the Washington Swamp first-hand and fell victim to its toxicity. We must work harder than ever to purge our government of its deeply rooted corruption. I recommend reading Walking Through the Fire for needed insight in this fight.” —Jim DeMint, Former U.S. Senator, chairman of Conservative Partnership Institute, and best-selling author of Satan’s Dare

“This book is a page turner. It is an insider look at the backstabbing, plotting, betrayal, and deals at the highest levels in government. A must read.” —Brigitte Gabriele, Founder and chairman of Act for America, NYT best-selling author, political commentator.

“Steve King is an American patriot—a man of great faith, unassailable character, and unwavering grace. In a world of phonies and cowards, Steve King is the real deal.” —Michelle Malkin, Investigative journalist and best-selling author of Invasion, Culture of Corruption, and Open Borders, Inc.