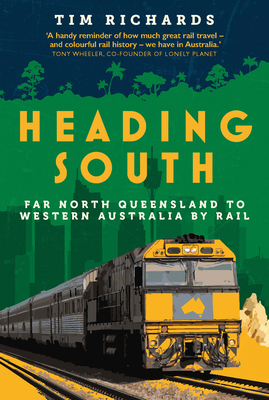 
Backordered - ETA Unknown
Freelance travel writer and Lonely Planet guidebook contributor Tim Richards decides to shake up his life by taking an epic rail journey across Australia. Jumping aboard iconic trains like the Indian Pacific, Overland, and Spirit of Queensland, he covers over 7,000 kilometres, from the tropics to the desert and from big cities to ghost towns. Tim’s journey is one of classic travel highs and lows: floods, cancellations, extraordinary landscapes, and forays into personal and public histories—as well as the steady joy of random strangers encountered along the way.
Tim Richards is a freelance travel writer whose work has appeared in publications around the world, including Lonely Planet’s guidebooks. He fell into travel writing after living and teaching in Egypt and Poland, and is especially drawn to the former communist countries of Central and Eastern Europe. He’s a light-packing obsessive, and loves chasing down a story with a historical angle. He lives in Melbourne’s lively central business district with his novelist wife, Narrelle M. Harris.
"Braving crocodiles, Yellow Fever (a Vietnamese-run cafe, not the disease) and rail replacement buses, Tim takes us on an epic 7,000-kilometre voyage across Australia by train. Tim's engaging portrait of Australia's people, places, history and great trains is guaranteed to give you itchy feet …" —Mark Smith, The Man in Seat 61