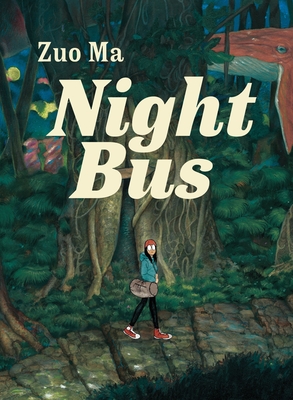 In Night Bus, a young woman wearing round glasses finds herself on an adventurous late night bus ride that constantly makes detours through increasingly fantastical landscapes. Meanwhile a young cartoonist returns home after art school and tries his hand at becoming a working artist while watching over his aging grandmother whose memory is deteriorating. Nostalgic leaps take us to an elementary school gymnasium that slowly morphs into a swamp and is raided by a giant catfish. Beetles, salamanders, and bug-eyed fish intrude upon the bus ride of the round-glasses woman as the night stretches on. Night Bus blends autobiography, horror, and fantasy into a vibrantly detailed surreal world that shows a distinct talent surveying his past.

Nature infringes upon the man-made world via gigantism and explosive abundance–the images in Night Bus are often unsettling, not aimed to horrify, but to upset the balance of modern life.

Zuo Ma is part of a burgeoning Chinese art comics scene that pushes emotion to the forefront of the story while playing with action and dreams.

Zuo Ma was born in Zhijiang City in 1983. After graduating from the Beijing Institute of Fashion Technology in 2005, he began his career as a cartoonist and freelance illustrator. Ma is considered one of the leaders in the nascent Chinese alternative comics scene.

"[Night Bus explores] memories of a vanishing China and track[s] the dramatic changes wrought on the landscape by industrialization."—The New Yorker

"Deftly translated by Orion Martin, Zuo Ma's tales are literally eye-opening trips... By scrutinizing the world through 'the eyes of another,' Zuo Ma explores the porous and surreal boundary between fiction and autobiography, familiar and otherness, human and animal, untamed nature and rampant development."
—Thuy Dinh, NPR

"Layered, poetic, deeply personal stories about a young artist and a country in transition. The dream-like, sometimes uncomfortable stories and highly rendered environments feel like echoes of Tsuge or Tatsumi updated for a new generation."—Matt Forsythe, Pokko and the Drum

"Night Bus depicts sleepy, starry, bug swarmed countrysides, far away from the turmoil I currently experience. The book sparked far off memories of catching bugs and chance encounters with strange kids and adults doing things I found puzzling and objectionable. These memories make me want to fall into a coma and escape the oppressive stress of city life. The depictions of mundane existence, concerns about the elderly, and Zuo Ma’s own career path drift seamlessly into moody creature fantasies that at times escalate into full-on kaiju sequences. The darkened, cinematic faces linger."—Jesse Moynihan, Forming, Midnight Gospel, Adventure Time

"Ma—a leader in China’s alternative comics scene—thoughtfully annotates each story with provenance and original publication, layering context and personal experience into his graphic memories. In this homage to familial storytelling, Ma—translated into English by small comics publisher Martin—succeeds in creating an intriguing portrait of an artistic young man showcasing his well-earned individuality."—Booklist

"The best way to describe Zuo Ma’s Night Bus is that it’s a dreamlike tale highlighting the rural and urban divide in modern China."—London Free Press