Somebeachsomewhere: A Harness Racing Legend from a One-Horse Stable (Paperback) 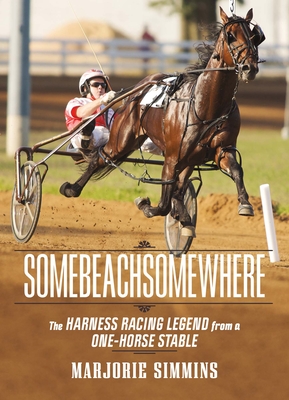 Somebeachsomewhere: A Harness Racing Legend from a One-Horse Stable (Paperback)

A comprehensive, fully illustrated biography of Nova Scotia's Somebeachsomewhere, the greatest standardbred pacer of all time, from the award-winning author of Year of the Horse.

It's November 2006 and Brent MacGrath, a car salesman from Nova Scotia, has just had his first glimpse of a gorgeous yearling at the Lexington Yearling Sale--and his heart skips a beat. He takes another look. Even this young, the bay stallion has size and presence. Against all odds, and with limited funds, MacGrath makes a successful bid for the colt.

Somebeachsomewhere: The Harness Racing Legend from a One-Horse Stable is a work of narrative non-fiction that follows the life and career of the Ohio-born, Canadian-sired superstar pacer known as Beach who belonged to a syndicate of six owners from Canada's East Coast. From a relatively humble lineage, Somebeachsomewhere turned out to be a horse of a lifetime: a world-champion Hall of Famer, smashing records and setting a single-season earning record as a three-year-old. Many consider Beach, who died unexpectedly in 2018, the greatest pacer and Standardbred sire of all time. Canadian and American racing fans loved the friendly stallion with an extra gear, and threw Beach Parties whenever he raced.

This is the first-ever complete, generously illustrated account of the Beach, a horse who captivated the world with his speed, courage and near-flawless gait. It is also a story of improbabilities and magic, featuring dozens of interviews with top American and Canadian horsemen and women, the owners of Empire Stallions in Avenel, Australia, and harness racing industry professionals.

Marjorie Simmins began her thirty-year career as a freelance journalist in Vancouver, with regular work published in the Vancouver Sun and in trade magazines. She has since published numerous essays and articles in magazines, newspapers, and anthologies, and won gold medals at both the National Magazine Awards and the Atlantic Journalism Awards. Simmins is the author of Coastal Lives, Year of the Horse, and Memoir: Conversations and Craft. She is also a lifelong equestrian, starting with a focus on English riding, and latterly, focusing on Western disciplines.