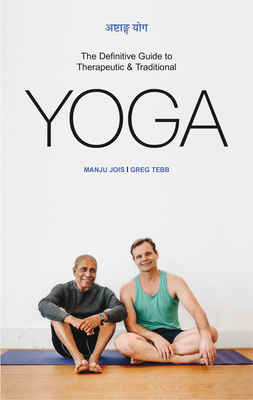 This ground - breaking guide to Ashtanga yoga, by two of the world's leading teachers, Manju Jois and Greg Tebb, is the only book on yoga you'll ever need.
The Ashtanga system, which is in the Hatha yoga tradition, was passed down by Sri T. Krishnamacharya and is now practiced by thousands of people around the world. Traditionally in Ashtanga, there are three main sequences of postures: Primary (Yoga Chikitsa), Intermediate (Nadi Sodhana), and Advanced Series (Sthira Bhaga). The traditional system of Ashtanga is based on Patanjali's philosophy of eight limbs of yoga. Students practice a sequence of poses linked with Vinyasa (breath movement) using Ujjayi Pranayama (deep rhythmic breathing), Bandha (muscular and energetic locks), and Drishti (meditative gaze points).
This system has often been misunderstood in the west as it has been taught as a powerful form of exercise with little emphasis on the therapeutic benefits. Finally, two of the world's leading Ashtanga teachers team up to demystify the practice and its teachings, bringing to light the role of yoga in long-term health, the benefits of each pose as well as illustrating safe adjustments for poses in each series.

Manju Jois has taught the true Mysore Ashtanga method for 60 years. Spanning 22 countries and 21 states in the US, Manju's world Ashtanga teaching tour is very broad. He offers Ashtanga workshops, teacher trainings and intensive week-long classes. He incorporates pranayama and vedic chantings in his classes. He incorporates pranayama and vedic chantings in his classes, which go very well with Ashtanga yoga practice. Manju's intention is to teach in the way of the Ancient tradition and bring the many benefits of Ashtanga yoga to his students. He hopes to bring better concentration and understanding of Ashtanga Yoga to his students in a world full of distractions. Manju's dedication to his life of teaching and practicing yoga has brought the benefits of the ancient tradition of Ashtanga Yoga to many students throughout the world, as he guides each to Unite with Yourself. Visit his website at manjujois.com.Greg Tebb discovered Ashtanga yoga in 1986 at the age of 16 in Australia. Greg has studied extensively with the Jois family. He studied with K. Pattabhi Jois in India and New York. Over the past 17 years, he has been fortunate to study and work with Manju Jois, his teacher and mentor, and often serves as a teaching assistant in Manju's workshops and has Manju Jois' blessing to teach into the Advanced Series of Ashtanga yoga. He has authored two training manuals with Manju Jois: Ashtanga Yoga: Yoga Chikitsa & Nadi Shodhana Yogasana Chikitsa Bhaga: Yoga Therapy and continues to study anatomy, physiology, and Sanskrit. He and his wife, Kathi, live in NJ with their son, Josh. You can read more about Greg at his website gregtebb.com.