Hard is the Journey: Stories of Chinese Settlement in BC’s Kootenays and Interior Towns (Paperback) 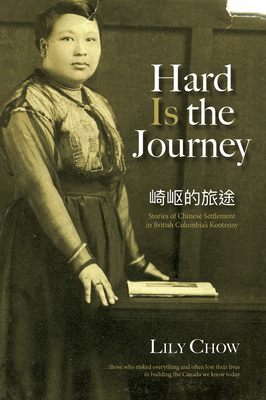 Hard is the Journey: Stories of Chinese Settlement in BC’s Kootenays and Interior Towns (Paperback)


Available for Pre-Order Now
In Hard is the Journey, award-winning historian and researcher Lily Chow shares the difficult history of Chinese Canadians in the Kootenay. She unearths the racism of early newspapers that portrayed Chinese immigrants as dirty, sinister, and lethargic people not fit to live in BC and uncovers the history of the Chinese labourers who completed the deadly work of blazing the Dewdney Trail from Hope to Kootenay only to be dismissed, without any compensation, as soon as the project was completed. She also offers an intimate and inspiring look into the many ways Chinese immigrants survived, finding community, building resilience, and preserving their culture. Piecing together interviews with Kootenay residents and descendents of Chinese immigrants, government records and documents, and early newspaper articles, Chow bravely exposes dark parts of BC’s history while shedding light on the struggles but also resilience and untold accomplishments of the Chinese immigrants who risked everything and often lost their lives in building the Canada we know today.
Lily Chow, a researcher and writer, immigrated to Canada in 1967. She possesses a master’s degree of Education and has taught high school in Prince George and Mandarin at the University of Northern British Columbia for three years. Her book publications include Blossoms in the Gold Mountains (2018), Blood and Sweat over the Railway Tracks (2014), Chasing Their Dreams (2000), and Sojourners in the North (1996). Currently, she resides in Victoria, BC.
For Blossoms in the Gold Mountains: “Lily Chow provides an inclusive and accurate historical narrative that looks back in time just as we look forward and aspire to be a nation that derives strength and commonality from the diversity she reveals. I commend Chow for this gift of sharing a history that is both factually correct and an inspiration for a future of together living and working in peace.” —BC BookWorld