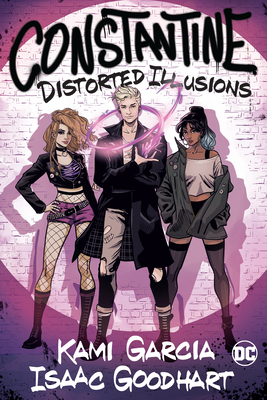 
Available in Warehouse. Wait for Email Confirmation for ETA
Constantine is not your average bad boy…

John Constantine is, and has always been, a magician of the highest caliber—who doesn’t need additional training from any highbrow magician, thank you very much.

Sensing an opportunity for independence, Constantine falsely accepts an apprenticeship in the United States to instead become the lead singer of his best friend’s punk band, Mucous Membrane. When the band begins to dabble in magic, a complicated spell gets out of hand…and the disastrous consequences might be more than Constantine can handle.

Join #1 New York Times bestselling author Kami Garcia (Beautiful Creatures) and artist Isaac Goodhart in the most thrilling magical team-up of the year!
Kami Garcia is the #1 New York Times, USA Today, and international bestselling co-author of the Beautiful Creatures and Dangerous Creatures novels. Beautiful Creatures has been published in 50 countries and translated into 39 languages. Kami’s solo series, The Legion, includes Unbreakable, an instant New York Times bestseller, and its sequel, Unmarked, both of which were nominated for Bram Stoker Awards. Her other works include X-Files Origins: Agent of Chaos and the YA contemporary novels The Lovely Reckless and Broken Beautiful Hearts. Kami was a teacher for 17 years before co-authoring her first novel on a dare from seven of her students. She is a cofounder of YallFest, the biggest teen book festival in the country. She lives in Maryland with her family.


Isaac Goodhart got his start in comics in 2014 as one of the winners of the Top Cow Talent Hunt. After drawing Artifacts #38, he moved on to illustrating Matt Hawkins’s Postal for 26 consecutive issues. He recently illustrated Under the Moon: A Catwoman Tale and Victor and Nora: A Gotham Love Story, written by Lauren Myracle and published by DC Comics.