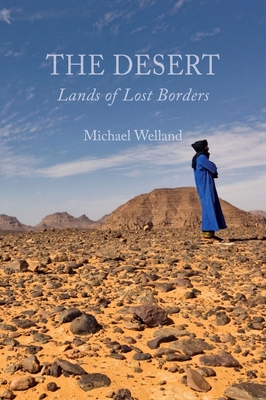 
This title is likely unavailable. Email or call for price and availability.
From endless sand dunes and prickly cacti to shimmering mirages and green oases, deserts evoke contradictory images in us. They are lands of desolation, but also of romance, of blistering Mojave heat and biting Gobi cold. Covering a quarter of the earth’s land mass and providing a home to half a billion people, they are both a physical reality and landscapes of the mind. The idea of the desert has long captured Western imagination, put on display in films and literature, but these portrayals often fail to capture the true scope and diversity of the people living there. Bridging the scientific and cultural gaps between perception and reality, The Desert celebrates our fascination with these arid lands and their inhabitants, as well as their importance both throughout history and in the world today.

Covering an immense geographical range, Michael Welland wanders from the Sahara to the Atacama, depicting the often bizarre adaptations of plants and animals to these hostile environments. He also looks at these seemingly infertile landscapes in the context of their place in history—as the birthplaces not only of critical evolutionary adaptations, civilizations, and social progress, but also of ideologies. Telling the stories of the diverse peoples who call the desert home, he describes how people have survived there, their contributions to agricultural development, and their emphasis on water and its scarcity. He also delves into the allure of deserts and how they have been used in literature and film and their influence on fashion, art, and architecture. As Welland reveals, deserts may be difficult to define, but they play an active role in the evolution of our global climate and society at large, and their future is of the utmost importance. Entertaining, informative, and surprising, The Desert is an intriguing new look at these seemingly harsh and inhospitable landscapes.
Michael Welland is a geologist with more than forty years’ experience in teaching and the international energy industry around the world, including sojourns in many of the planet’s great arid regions. Author of the award-winning book Sand: A Journey through Science and the Imagination, he has given public lectures and radio broadcasts in the United States and Europe and writes a blog on all topics sandy.
“In this impressively illustrated scientific and cultural history, [Welland] sets out the bigger picture, harnessing geology, climate science, botany, zoology, ecology, and anthropology to reveal places of natural and cultural abundance, with rich histories.”

“This handsome book is informative, well-illustrated, broad-ranging, and clever. The author has managed to weave together a whole array of different strands that serve to make deserts what they are. . . . Lovers of deserts will love this book and will also learn much from it.”
— Andrew Goudie, Geoscientist Magazine

“The desert also has a dreamy reputation, but Michael Welland’s The Desert is largely romance free. It takes a serious, scientific, and sociological look at life on the sandy plains that take up a third of our landmass—from Mojave to Oz outback—without being too arid.”
— Wanderlust Magazine

“In this expansive work, whose cultural references range from the classical to the Mad Max reboot, his love of these empty regions is palpable and highly infectious. . . . With chapters on art and film, on desert poetry, on colonial exploitation, on the erosion of rocks by wind and sand, it all adds up to an encyclopaedic survey.”

“Approximately one-third of Earth’s land surface is desert, places that receive less than ten inches of rain per year. Along with the polar caps, arid lands are bellwethers of climate change. This sprawling cultural and physical geographic study of the world’s deserts attempts to describe how climate change alters landscapes and consequently affects the life around them. To accomplish this sweeping study, Welland, who is a trained geologist, draws upon his wide knowledge of geology, geography, and climatology while interweaving observations about art, music, philosophy, literature, history, economics, and other cultural references. The result is a vivid picture of the climatology of deserts and their influence on society throughout history. The science is informative but not overly technical for casual readers. The author includes copious photos, charts, and diagrams. . . . Highly recommended.”
— Choice

“Geologist Michael Welland's The Desert: Lands of Lost Borders tackles deserts around the world, but for him a desert is much more than sandstorms. It’s art and history, spirit and silence, conflict and courage, the people who live in the desert, and the dispelling of myths.”

“In summary, writing a book this wide-ranging, and this thought-provoking, was risky, but the results are impressive indeed. Any quibbles aside, The Desert goes a long way toward reaching its stated goals, and represents a valuable contribution to the literature of discovery -- both outward (geographic exploration) and inward (introspective musings about place). The Desert easily earns place on my bookshelf next to the massive Encyclopedia of Deserts, edited by Michael Mares and published by the University of Oklahoma Press in 1999. Between its covers, as in the desert itself, remarkable discoveries await those who take the time to search.”
— Terrae Incognitae