Confidante of 'tyrants': The Story of the American Woman Trusted by the Us's Biggest Enemies (Paperback) 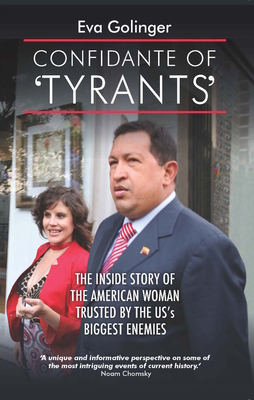 When US lawyer Eva Golinger first spent some time in Venezuela uncovering her ancestral roots, she little realized how the country was going to change her life. Within a few years she had become an enthusiast for the Bolivarian Revolution and a close confidante of its charismatic leader, Hugo Ch vez. She achieved worldwide notoriety by exposing and condemning US intervention in Venezuela and ended up travelling with Ch vez all over the world, spending time with many other controversial leaders.

In this frank and disarming memoir, she tells the full story of her time in Ch vez's inner circle and reflects on what she has learned about revolutionary politics, about the dangers of authoritarian populism - and about herself.

Confidante of Tyrants is told from a very personal, intimate, insider perspective of what it's like to be an American woman who was drawn to a movement pledging to fight for social justice with a very charismatic leader. Eva was behind the scenes of global power. She wandered the halls of presidential palaces, rubbed elbows with controversial world leaders, and was courted by declared enemies of her own country. She would come to know and even befriend some of these men, who so many in the world saw as tyrants. She saw them unveiled and had privileged access to Hugo Chavez, Fidel Castro, Vladimir Putin, Bashar al Assad, Muammar Gaddafi, Julian Assange and other vilified strongmen and U.S. enemies. She was a witness to their capacity to garner the attention and support of millions, and saw how they used it to create and expand their power.

Eva Golinger is a graduate of Sarah Lawrence College (1994) and CUNY Law School (2003), and the author of six non-fiction books including The Chavez Code, a best seller in Latin America and published in eight languages around the world (English, Spanish, French, German, Italian, Russian, Turkish and Farsi). Over 500,000 copies of The Chavez Code were sold and distributed worldwide. Her work has been extensively covered by The New York Times, The Washington Post, Newsday, The Chicago Tribune, Reuters, AP, The International Herald Tribune, The Wall Street Journal, The Los Angeles Times and other major media around the world. She practices law in New York, specializing in immigration and international law. She lived in Venezuela for 12 years and counseled several Presidents, Foreign Ministers and senior officials in Latin America and was an Advisor to former Venezuelan President Hugo Chavez for nearly a decade.