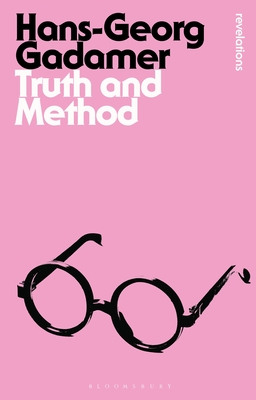 Truth and Method is a landmark work of 20th century thought which established Hans Georg-Gadamer as one of the most important philosophical voices of the 20th Century. In this book, Gadamer established the field of 'philosophical hermeneutics': exploring the nature of knowledge, the book rejected traditional quasi-scientific approaches to establishing cultural meaning that were prevalent after the war. In arguing the 'truth' and 'method' acted in opposition to each other, Gadamer examined the ways in which historical and cultural circumstance fundamentally influenced human understanding. It was an approach that would become hugely influential in the humanities and social sciences and remains so to this day in the work of Jurgen Habermas and many others.
Hans-Georg Gadamer was born on 11 February 1900 and died on 13 March 2002. He was the author, most notably, of Truth and Method, and, more recently, of The Beginning of Philosophy and The Beginning of Knowledge.

"Truth and Method is a landmark work of 20th century thought...[it] is one of the two or three most important works of this century on the philosophy of humanistic studies...Truth and Method reinforces an insight that is threatened with oblivion in our swiftly changing age...The volume is Gadamer's magnum opus, the comprehensive and integrated statement of his rich and penetrating reflections. The translators have rendered Truth and Method with accuracy, which helps contemporary American readers understand Gadamer more fully. The material is powerful...The translation is readable and often powerfully eloquent as Gadamer's German, providing a bridge, not an obstacle, between Gadamer and his readers." - SirReadaLot.org