The Declaration of the Rights of Women (Hardcover) 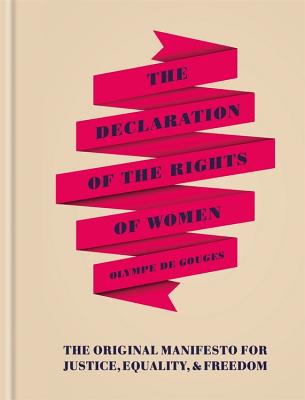 The Declaration of the Rights of Women (Hardcover)

People often consider feminism to be a modern idea and assume that women of the past simply accepted the life carved out for them. In fact, women's rights have been at the forefront of political and social debate for centuries. Written over 200 years ago, The Declaration of the Rights of Women by Olympe de Gouges started a chain reaction in history that went on to inspire other women to fight against the lives society had imposed upon them. Written with a sarcastic tone and militant spirit, the arguments still remain true today.

This book also includes articles from The UN Declaration On The Elimination of Discrimination Against Women. How can you fight if you don't know what you're still fighting for or even who you're fighting against? The UN has already established a vast range of women's rights that are constantly being chipped away at by organisations.

This book presents the texts to you in an engaging way. Articles are broken up by artist's interpretations of each point along with quotes from a range of feminists throughout history including Emmeline Pankurst and Hilary Clinton.

So rediscover some of the key texts that helped shape feminism today in time for International Women's Day on March 8th!
Olympe de Gouges was a French feminist and activist during the French Revolution, a time of great change and yet such things were still radical. Her text, The Declaration of the Rights of Womenand of the Female Citizen was written in response to the French constitution of 1791 to address the key issues for women's rights that it had failed to cover. Over 200 years later and Gouges's arguments still remain relevant today.