Rhapsody For The Theatre (Paperback) 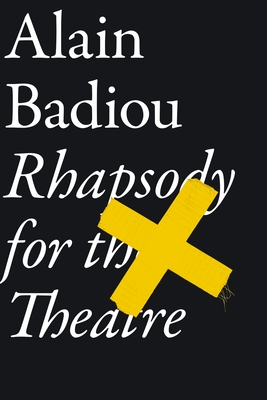 Rhapsody For The Theatre (Paperback)


This title is likely unavailable. Email or call for price and availability.
For Alain Badiou, theatre—unlike cinema—is the place for the staging of a truly emancipatory collective subject. In this sense theatre is, of all the arts, the one strictly homologous to politics: both theatre and politics depend on a limited set of texts or statements, collectively enacted by a group of actors or militants, which put a limit on the excessive power of the state. This explains why the history of theatre has always been inseparable from a history of state repression and censorship.

This definitive collection includes not only Badiou’s pamphlet Rhapsody for the Theatre but also essays on Jean-Paul Sartre, on the political destiny of contemporary theatre, and on Badiou’s own work as a playwright, as author of the Ahmed Tetralogy.
Alain Badiou teaches philosophy at the École normale supérieure and the Collège international de philosophie in Paris. In addition to several novels, plays and political essays, he has published a number of major philosophical works, including Theory of the Subject; Being and Event; Manifesto for Philosophy; and Gilles Deleuze. His recent books include The Meaning of Sarkozy; Ethics; Metapolitics; Polemics; The Communist Hypothesis; Five Lessons on Wagner; and Wittgenstein's Antiphilosophy.

Bruno Bosteels, Professor of Romance Studies at Cornell University, is the author of Badiou and Politics; Marx and Freud in Latin America; and The Actuality of Communism. He is also the translator of several books by Alain Badiou: Theory of the Subject; Can Politics Be Thought?; and What Is Antiphilosophy? Essays on Kierkegaard, Nietzsche, and Lacan. He currently serves as the General Editor of Diacritics.
"Badiou has been an intellectual hero of France’s anti-capitalist left since the Paris street protests of 1968."—BBC HARDtalk

"A figure like Plato or Hegel walks here among us!"—Slavoj Žižek

"An heir to Jean-Paul Sartre and Louis Althusser."—New Statesman