The Philomena of Chrétien the Jew: The Semiotics of Evil (Research Monographs in French Studies #59) (Hardcover) 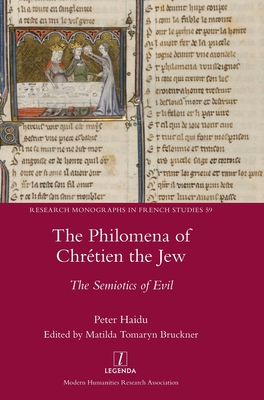 The Philomena of Chrétien the Jew: The Semiotics of Evil (Research Monographs in French Studies #59) (Hardcover)

Ovid's gruesome tale of rape, mutilation, and revenge, transformed into Philomena and retold in French octosyllables, found its way into the fourteenth century Ovide moralis with a signature at its mid-point: Crestiens li gois, the great twelfth century romancer's early avatar. Writing two generations after the Jewish massacres of the First Crusade, Christian the Goy playfully alludes to his hybrid status as a forced convert, even as he hides his identity in order to invent - like Philomena herself - new signs, a new language to speak the unspeakable and construct a fictional universe whose universalist values offer a critique of contemporary society. Such is Peter Haidu's conjecture and argument, combining philology, history and theory to offer a political interpretation and close reading of how a young poet transposed his horror at the holocaust of 1096.

Left unpublished at his death, this summa of Peter Haidu's long and distinguished career as medievalist, literary theorist, historian, and master interpreter of Chr tien de Troyes, has been edited by Matilda Tomaryn Bruckner, Professor emerita of French (Boston College).