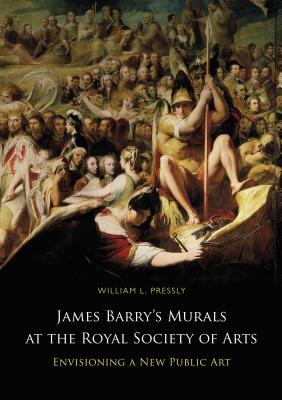 
Available in Warehouse. Wait for Email Confirmation for ETA
Between 1777 and 1784, the Irish artist James Barry (1741-1806) executed six murals for the Great Room of the Royal] Society of Arts in London. This book is the first to offer an in-depth analysis of these remarkable paintings.

Barry insisted on, and received, complete control over his subject matter, the first time in the history of Western art that the patron of a large, impressive interior agreed to such a demand. The artist required autonomy in order to present his personal vision, which encompasses a rich and complex surface narrative as well as a hidden meaning that has gone unperceived for 230 years.

Ultimately, as this book seeks to show, the artist intended his paintings to engage the public in a dialogue that would utterly transform British society in terms of its culture, politics, and religion. In making this case, the book brings this neglected series into the mainstream of discussions of British art of the Romantic period, revealing the intellectual profundity invested in the genre of history painting and re-evaluating the role Christianity played in Enlightenment thought.