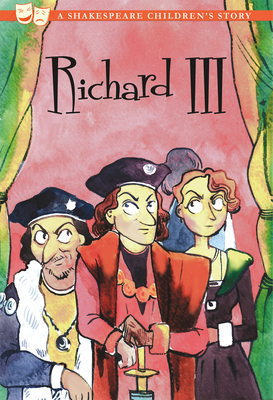 By William Shakespeare (Based on a Book by), Kellie Jones (Adapted by)


Available in Warehouse. Wait for Email Confirmation for ETA
An illustrated adaptation of Shakespeare's famous play - at an easy-to-read level for readers of all ages

Richard III is one of Shakespeare's most popular historical plays. It takes place in the final years of the War of the Roses, when the first and last Yorkist kings rule England. In it, the hunchbacked Richard, Duke of Gloucester, covets his brother's throne, and will stop at nothing to get it. This includes the murder, betrayal and manipulation of family, friends and foe alike, as well as some of Shakespeare's most famous quotes.
About Sweet Cherry Easy Classics:
Sweet Cherry Easy Classics adapts classic literature into illustrated stories for children, introducing these timeless tales to a new generation. (All titles in the series are leveled for classroom use, including GRLs.)
Kellie Jones ============ Kellie Jones studied Writing for Young People in England, Publishing in Scotland and Japanese in Japan. A fan of anime and Asian dramas, the busier Kellie is, the more likely she will embark on an epic 50+ episode series whose subtitles leave no room for multitasking. After bookselling in Australia, Kellie is now a children's book editor in Leicester, UK.