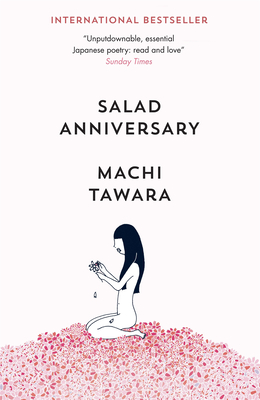 
On Our Shelves as of 9am Today
Machi Tawara's first book of poems, Salad Annivsersary, combines the classical 'tanka' form with the subject of a modern love affair. It became a sensation, selling over 2 million copies - and the 'salad phenomenon' in Japanese culture was comparable to the 'bananamania' that followed publication of the first novel by Tawara's contemporary Banana Yoshimoto. Contains 15 poems:

Pushkin Collection editions feature a spare, elegant series style and superior, durable components. The Collection is typeset in Monotype Baskerville, litho-printed on Munken Premium White Paper and notch-bound by the independently owned printer TJ International in Padstow. The covers, with French flaps, are printed on Colorplan Pristine White Paper. Both paper and cover board are acid-free and Forest Stewardship Council (FSC) certified.
Machi Tawara (b. 1962) is a contemporary Japanese poet, writer and translator, most famous for her revitalization of the classical 'tanka' form of poetry. Her 50-poem sequence August Morning received the Kadokawa Tanka Prize, and Anniversary of the Salad became a bestseller on its publication in 1987.


Translated from the Japanese by Juliet Winters Carpenter.
"these poems mix the ancient grace and musicality of the tanka form with a modern insight and wit. With a light, fresh touch and a cool eye, Machi Tawara celebrates the small events in a life fully lived and one that is wonderfully touched by humor and beauty. This book will stay with you through the day, and long after you have finished it." — Reading Group Choices

"It is no wonder this book triggered a cultural phenomenon in Japan. She describes the source of her desires and frustrations with such precision that they become universal. . . Machi Tawara’s Salad Anniversary is an acutely self-aware portrait of modern life and love. . . Sensorial experiences string together past, present, and future, creating a narrative based on emotionally evocative images. " — Asymptote Journal

"Haruki Murakami is doleful, Hanya Yanagihara’s crestfallen, Banana Yoshimoto is a near infinite abyss. The poet Machi Tawara is of a different ilk; she has a distinctly sanguine tone. . . Tawara is a champion of gratitude and glee, best capturing simple satisfactions. . . From the garden to the produce aisle, her verses are full of zest—combining a feeling of contentment with images of ripening fruit. . . Tawara’s tanka bunch together like an overfull vine of grapes, creating powerful narratives that often have a timeless feeling, like that of a folk legend. . . It is the weaving together of the part (her hopeful tanka) and the whole (the narrative of her poems) that yield such a fruitful collection, perfect for the coming summer." — The New Orleans Review