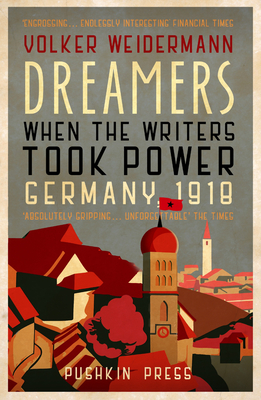 
Backordered - ETA Unknown
History that reads like a novel: the story of the writers and intellectuals behind the failed Bavarian Revolution of 1918, by the author of the acclaimed Summer Before the Dark

At the end of the First World War in Germany, the journalist and theatre critic Kurt Eisner organised a revolution which overthrew the monarchy, and declared a Free State of Bavaria. In February 1919, he was assassinated, and the revolution failed.

But while the dream lived, it was the writers, the poets, the playwrights and the intellectuals who led the way. As well as Eisner, Thomas Mann, Rainer Maria Rilke, and many other prominent figures in German cultural history were involved.

In his characteristically lucid, sharp prose, Volker Weidermann presents us with a slice of history - November 1918 to April 1919 - and shows how a small group of people could have altered the course of the twentieth century.
The award-winning writer and literary critic Volker Weidermann was born in Germany in 1969, and studied political science and German language and literature in Heidelberg and Berlin. He is the cultural editor of Der Spiegel, and the author of Summer Before the Dark, which is also published by Pushkin Press.
• "Vivid, full of sardonic humour, moral nuance and personal drama, this book takes the reader into the heart of the revolutionary crowd, and shows how exhilarating and terrifying it is to be there"--New Statesman
• "A superb account... a remarkable cast of characters... [Weidermann] brings to life long forgotten and seemingly insignificant and quirky episodes in history"--Guardian
• "An absolutely gripping tale... great pace, action and character... the characters are unforgettable"--The Times
• "Dramatic... a compact and colourful account, with the breathless pace of war reporting"--Spectator
• "A gripping account... Volker Weidermann's blend of engrossing, urgent reportage and gentle, dissociative musing will be familiar to readers of his previous work, the bestselling Summer Before the Dark... deceptively extravagant and endlessly interesting book"--Financial Times