On the Literature and Thought of the German Classical Era: Collected Essays (Paperback) 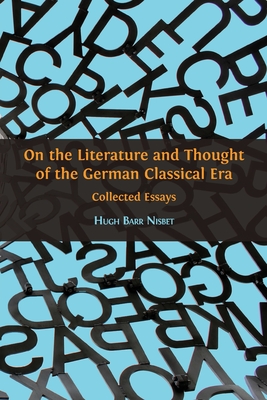 On the Literature and Thought of the German Classical Era: Collected Essays (Paperback)

This elegant collection of essays ranges across eighteenth and nineteenth-century thought, covering philosophy, science, literature and religion in the 'Age of Goethe.' A recognised authority in the field, Nisbet grapples with the major voices of the Enlightenment and gives pride of place to the figures of Lessing, Herder, Goethe and Schiller.

These eleven essays range widely in their compass of thought and intellectual discourse, dealing incisively with themes including the philosophical implications of literature and the relationship between religion, science and politics. The result is an accomplished reflection on German thought, but also on its rebirth, as Nisbet argues for the relevance of these Enlightenment thinkers for the readers of today.

The first half of this collection focuses predominantly on eighteenth-century thought, where names like Lessing, Goethe and Herder, but also Locke and Voltaire, feature. The second has a wider chronological scope, discussing authors such as Winckelmann and Schiller, while branching out from discussions of religion, philosophy and literature to explore the sciences. Issues of biology, early environmentalism, and natural history also form part of this volume. The collection concludes with an examination of changing attitudes towards art in the aftermath of the 'Age of Goethe.'

The essays in this volume have been previously published separately, but are brought together in this collection to present Nisbet's widely-acclaimed perspectives on this fascinating period of German thought. It will be of interest to scholars and students of the intellectual life of Europe during the Enlightenment, while its engaging and lucid style will also appeal to the general reader.