The Propaganda War in the Rhineland: Weimar Germany, Race and Occupation After World War I (International Library of Twentieth Century History #57) (Paperback) 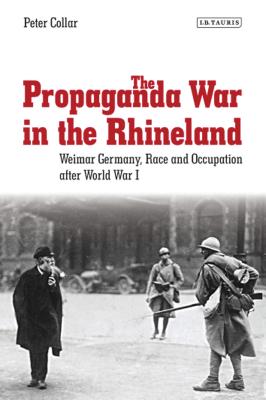 Piecing together a fractured European continent after World War I, the Versailles Peace Treaty stipulated the long term occupation of the Rhineland by Allied troops. This occupation, perceived as a humiliation by the political right, caused anger and dismay in Germany and an aggressive propaganda war broke out-heightened by an explosion of vicious racist propaganda against the use of non-European colonial troops by France in the border area. These troops, the so-called Schwarze Schmach or 'Black humiliation' raised questions of race and the Other in a Germany which was to be torn apart by racial anger in the decades to come. Here, in the first English-language book on the subject, Peter Collar uses the propaganda posters, letters and speeches to reconstruct the nature and organisation of a propaganda campaign conducted against a background of fractured international relations and turbulent internal politics in the early years of the Weimar Republic. This will be essential reading for students and scholars of Weimar Germany and those interested in Race and Politics in the early 20th Century.

Peter Collar holds a PhD in German History from the University of London, and has had a distinguished career as a scientist